What does it mean to be made in the image of God? This topic has a long and varied history of discussion, spanning at least the four thousand-or-so-year history of Judeo-Christian religion. For Christians, our reflections on this topic must begin with the words of Genesis: END_OF_DOCUMENT_TOKEN_TO_BE_REPLACED 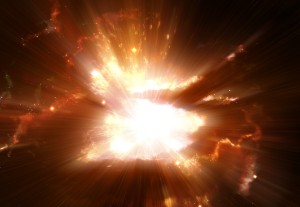 C. S. Lewis once said that if the incarnation happened, “it was the central event in the history of the earth.” What is the incarnation? And why has it been such an important area of theological consideration since the earliest days of Christianity? The term ‘incarnation’ may be defined as “a person who embodies in the flesh a deity, spirit, or quality.”[1] For the Christian tradition, the man who has been understood as deified has been Jesus of Nazareth; but the Christian claim of Jesus as God, not merely as one who embodied God, historically presented a plethora of questions to the early Christian theologians. END_OF_DOCUMENT_TOKEN_TO_BE_REPLACED

“Christians are called to live for the good of the world. This requires understanding and action. We must think clearly about the world and engage deeply when and where we can.” 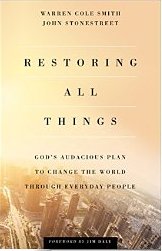 In his essay “On the Reading of Old Books”, C.S. Lewis once admonished his readers to engage numerous old books for every new book that they read. The prevailing attitude of Lewis’s day (and, indeed, that of our own) often emphasizes the new. In opposition to this “cult of innovation” we are often encouraged to return to the foundational classics of civilization and culture, and rightly so. Yet along with the wealth of the past, we must also read new books—this very website contains my reflections on a new book almost every week. Many of these new books I fully expect to make only limited lasting contributions to the shape of our world (if they make any substantial contribution at all). There are exceptions of course—though I shall not delve into a catalogue of what I perceive to be the most influential contemporary books in this particular review—and these writings are to be engaged with great eagerness. Certain other books are highly descriptive in nature, accurately taking the pulse of our world from a particular moment and perspective. The best of these are works which not only offer a catalog of contemporary culture but also connect that description with principled analysis. Though I have read many a writing claiming this dual role of description and analysis, none in recent years hold a candle to the work which is the topic of today’s review. END_OF_DOCUMENT_TOKEN_TO_BE_REPLACED 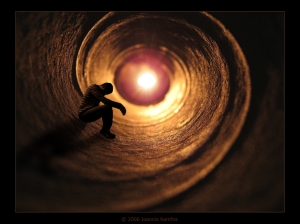 A while back I posed a question to my Facebook friends: “Do we need to rethink Christianity?” I asked this question in response to an article concerning the need for part of the Christian Church (specifically, the Roman Catholic Church) to rethink its stance on numerous doctrinal points. Now whether you think the Roman Catholic Church (and/or other more conservative portions of the Christian family) should reconsider the appropriate theology and practice concerning the role of women in the church and definition of marriage, I think that pondering the potential implications of “rethinking Christianity” is important. END_OF_DOCUMENT_TOKEN_TO_BE_REPLACED 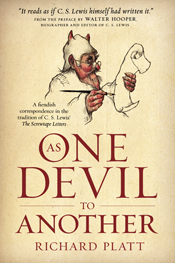 Many readers of C. S. Lewis have enjoyed reading his Screwtape Letters, a series of correspondences between two demons, the instructor Screwtape and his nephew Wormwood, as they attempt to secure the damnation of their human “patient.” As delightfully diabolical and insightful as Lewis’ work is, however, few writers have adopted his style of “apologetics-by-dialogue” from the beyond. That has all changed with Richard Platt’s As One Devil to Another. END_OF_DOCUMENT_TOKEN_TO_BE_REPLACED

This post is the final in our series examining C. S. Lewis’s view of “myth.” 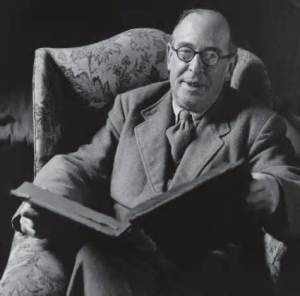 Lewis gives perhaps his clearest exposition on myth in his essay entitled “Myth Became Fact“. Lewis begins this essay with the idea that he is going to refute his friend Corineus and his assertion that no one who calls themselves a Christian is actually a Christian in any meaningful sense. To Corineus, Christianity is something horrible that no modern man could accept in its totality, and thus those who confess Christianity are really confessing modernism using Christian jargon. Lewis seeks to dispel the idea that Christianity is a “system of names, rituals, formulae, and metaphors which persist although the thoughts behind it have changed” (“Myth Became Fact, 138). Lewis asks Corineus, and those like him, “Why, on his view, do all these educated and enlightened pseudo-Christians insist on expressing their deepest thoughts in terms of an archaic mythology which must hamper and embarrass them at every turn?” (Ibid., 138) END_OF_DOCUMENT_TOKEN_TO_BE_REPLACED

This post is part of an ongoing series examining C. S. Lewis’s view of “myth.” 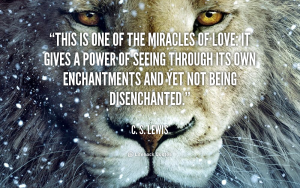 In Miracles, Lewis reflects on the importance of myth in regards to the Old Testament and Israel. Lewis writes that “The Hebrews, like other people, had mythology: but as they were the chosen people so their mythology was the chosen mythology –the mythology chosen by God to be the vehicle of the earliest sacred truths, the first step in that process which ends in the New Testament where truth has become completely historical” (Miracles, 218). For Lewis, myth is historically important in creating the context of beliefs for the truly factual, the person and work of Jesus Christ. He writes that “Just as God is none the less God by being Man, so the Myth remains Myth even when it becomes Fact. The story of Christ demands us, and repays, not only a religious and historical but also an imaginative response” (Ibid., 218) END_OF_DOCUMENT_TOKEN_TO_BE_REPLACED

This post is part of an ongoing series examining C. S. Lewis’s view of “myth.” 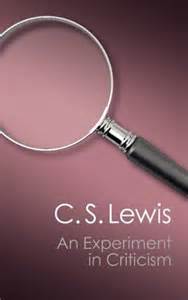 In An Experiment in Criticism, Lewis approached “myth” in several ways, most importantly as a story which has “a value in itself –a value independent of its embodiment in any literary work” (Experiment in Criticism, 41). Here Lewis defined myth in several ways. First, myth is ‘extra-literary’ as it has value outside its manifestation within a literary context. Second, myth elicits pleasure from the reader, but not pleasure based upon any specific literary device such as surprise or suspense (Ibid., 43). Third, human sympathy is minimal –the reader generally does not project himself into the myth (Ibid., 44). Fourth, myth is fantastic and deals with the seemingly impossible (Ibid., 44). Fifth, the experience of the myth, while possibly joyful or sad, is always serious and grave (Ibid., 44). Finally, even within the midst of the seriousness, the myth is awe-inspiring, portraying the communication of some great truth to the reader (Ibid., 44). From this literary perspective, the importance of myth to Lewis was the experience: “When I talk of myths I mean myths as we experience them: that is, myths contemplated but not believed, dissociated from ritual, held up before the fully waking imagination of a logical mind” (Ibid., 45). Myth is to be thought-provoking, awe-inspiring, and contemplated. Yet, the appreciation of myth does not necessarily have to be literary and scholarly. While any man can read myth, only the truly literary will be impacted by both the literature for its own sake as well as the delight that accompanies the meaning behind the myth (Ibid., 46-47). Having viewed Lewis’ literary approach, we now turn to examining his perspective on myths in terms of their historicity. END_OF_DOCUMENT_TOKEN_TO_BE_REPLACED 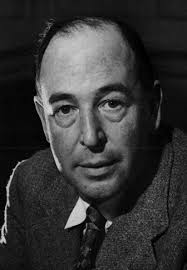 Most people do not like being told that they are wrong. This is especially true when it comes to politics or religious faith. Interestingly, a number of pundits and scholars have taken to calling religious faith “myth” in recent years, especially religious faith that for many adherents hinges upon certain events that claim to be historical. The work of Joseph Campbell springs to mind, as do more contemporary perspectives such as those espoused by Bill Maher and Richard Dawkins. For perspectives such as these (most admittedly devoted to philosophical naturalism) and others (one thinks of certain Historical Jesus scholars over the years), Christian claims about the resurrection of  Jesus of Nazareth cannot be categorized as anything but “myth,” the stuff of legend, or theological story-telling. And, as one might expect, most Christians do not appreciate being told that their deeply held religious convictions are, in a word, myth. While for many the term “myth” connotes feelings of falsehood or story, Christian thinkers such as C.S Lewis conceived of myth in other terms. In the essay that follows, we examine Lewis’ conception of “myth,” as well as his understanding of the relationship between “myth” and “fact” in the Christian narrative. END_OF_DOCUMENT_TOKEN_TO_BE_REPLACED

In my yesterday’s post, I reflected on some of the answers which have been offered to the “question of suffering,” the query about why there is evil and suffering in the world if there is a good and all-powerful God. In today’s post, I hope to begin crafting an “answer” to this question—not an answer in an absolute sense, but rather an perception and understanding by which we can try to make some sense of suffering and loss.

How do we understand and respond to all of the suffering that we see and experience in the world? Douglas John Hall, in his book God and Human Suffering, makes the claim that perhaps it best to think of certain forms of suffering as somehow innate to the human condition—necessary consequences of the limitations of humanity.1 Put another way, freedom is always freedom within certain boundaries—perhaps human suffering arises due to our transgressing our boundaries.2 Plenty of philosophers have tackled this issue: when free agents are created, true freedom necessitates the possibility of using that freedom to engage in activities which inhibit the freedom of other agents.3 Oxford professor Mike Lloyd argues that a measure of free will for humanity is necessary in understanding the issue of evil and suffering, for without freedom there can be no justice (men cannot be held accountable for their actions unless they are free) and no love (the love of predetermined robots is not real love).4
END_OF_DOCUMENT_TOKEN_TO_BE_REPLACED