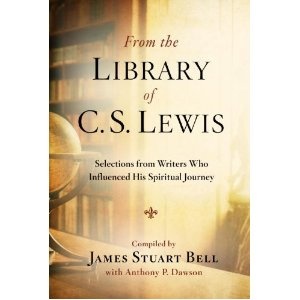 When I received James Stuart Bell and Anthony P. Dawson’s From the Library of C.S. Lewis: Selections from Writers Who Influenced His Spiritual Journey, I was not sure what to expect. Upon my reading I was pleasantly surprised by both the breadth and depth of the selections employed by Bell and Dawson to introduce and inspire the modern reader to engage the writings which impacted C. S. Lewis. Lewis has been recognized as one of the intellectual and spiritual giants of the 20th century, and From the Library of C.S. Lewis does a commendable job presenting the plethora of thinkers that influenced his life and thought.

From my experience studying Lewis, serving as a member of the Oxford Lewis Society, and time spent at the Marion E. Wade Center (Wheaton, IL) where Lewis’ personal library remains housed, the variety of the selections that Bell and Dawson present are entirely indicative of Lewis’ personal reading. Accordingly, their selections often offer helpful insights into his life and thought. Selections are arranged topically and include selections from G.K. Chesterton, Martin Luther, John Calvin, St. Augustine, Samuel Johnson, John Bunyan, St. Athanasius, Samuel Coleridge, Austin Farrer, Dorothy Sayers, and Thomas à Kempis, to name but a few of the more than 100 authors that are quoted.

If one believes that context is important for understanding the past, then, as Lewis scholar Jerry Root of Wheaton College writes, “one must become familiar with the body of literature that marked [Lewis’] life. [In From the Library of C.S. Lewis] Jim Bell and Tony Dawson give curious students of Lewis a glimpse of the books and authors that informed his life’s work and kindled his imagination.” Given the scope of the work, this book may be somewhat overwhelming to the casual curious student or reader of Lewis. However, the gold mine of readings that Bell and Dawson present make this book an excellent resource for the Lewis scholar or as a resource for Bible study of sermon preparation. As a point of critique, perhaps Bell and Dawson would have been better suited compiling a list of Lewis’ influential readers along with some longer selections from the more important influences, as some of the selections provided little to excite the reader about the source material and may leave the typical reader somewhat perplexed as to how a certain passage pertains to Lewis’ life and thought. Overall however, this book is a wholly appropriate resource to students interested in Lewis’ context and as a short reference work of influential Christian authors and ideas.

I received this book from WaterBrook Multnomah Publishing in exchange for my honest review. All opinions expressed are my own.

One thought on “Book Review: From the Library of C.S. Lewis (Bell and Dawson)”