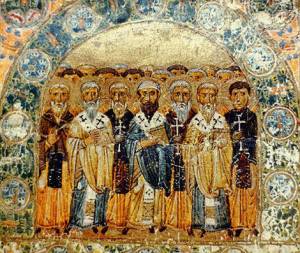 The earliest non-canonical references to Communion come in the writings of the Apostolic Fathers, namely Ignatius of Antioch (c. 108 CE) and the Didache (c. 110 CE). Ignatius, much like Paul in 1 Corinthians, indicates that he is very concerned with proper Christian order at Communion, writing, “Give heed to keep one Eucharist. For there is one flesh of our Lord Jesus Christ, and one cup unto union with His blood. There is one altar, as there is one bishop, together with the presbytery and deacons, my fellow servants; that whatsoever you do, you may do according unto God.”2

Also worth noting is Ignatius’s famous passage about how the Eucharist is the medicine of immortality. Here he tells the Ephesian church to, “Assemble yourselves together in common, every one of you together, man by man, in grace, in one faith and one Jesus Christ, who after the flesh was of David’s race, who is Son of Man and Son of God, to the end that you may obey the bishop and presbytery without distraction of mind; breaking one bread, which is the medicine of immortality and the antidote that we should not die but live forever in Jesus Christ.”3

In another early Christian writing, the Didache, we see that the administration of Communion was beginning to be explained more precisely, and that the Supper was only for the baptized. The writer of the Didache exhorts his readers, “Let none eat or drink of your Eucharist but such as have been baptized into the name of the Lord, for of a truth the Lord hath said concerning this, ‘Give not that which is holy unto dogs.’”4 Although not the precise Eucharistic theologies that would come later, early second century Christians were beginning to more clearly define what Communion was and how it should be enacted in the Christian life.

One thought on “A Brief History of Communion: Apostolic Fathers”