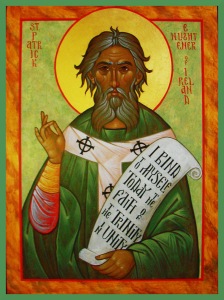 Anyone even remotely familiar with the contents of the Christian Bible cannot help but recognize Patrick’s near constant reliance upon the scriptures in his writings. In the words of J.B. Bury, Patrick “was a homo unius libri; but with that book, the Christian Scriptures, he was extraordinarily familiar. His writings are crowded with Scriptural sentences and phrases….”[1] There are few paragraphs of the Confessio which do not contain numerous allusions to the scriptures and quotations (sometimes streams of quotations) are never far from Patrick’s pen.[2] In short, Patrick’s writings exhibit consummate scriptural consciousness, being filled with biblical phraseology and literarily rooted in the verba of scripture.[3]

“He almost bludgeons his readers with the Bible. There are a number of curious misapplications of biblical passages in Patrick’s writings which suggest that he looks for Scriptural support or takes refuge in Scriptural language at any cost, in any circumstances….”[6]

The third motif surrounding Patrick’s use of scripture casts the biblical text as the source for his theology and faith-life. This is to suggest not only that Patrick used biblical passages to articulate his own faith, but also indicates that the sources and inspiration for his theology and practice were ultimately rooted in the scriptures themselves.[7] On this, Howlett writes that, “If Patrick was a homo unius libri ‘a man of one book’, he had read, marked, learned, and inwardly digested that book. He appropriated not only the words, but the inner meanings and habits of thought he had found in the Latin Bible and internalized them to a remarkable degree….”[8]

Patrick’s practical theology was ultimately rooted in the verbum of God, the still-speaking revelatory voice who spoke to him at various points in his life and whose words supersede any argument an opponent could muster.[9] Yet these ongoing personal revelations accorded with the narrated theology found in the scriptures—in other words, the Verbum and the verbum always coordinated for Patrick. In the Confessio, then, Patrick exhibits a dynamic scriptural consciousness, as he constantly relies on the scriptures as the source of his structure, arguments, and (ultimately) as the very ground (coordinated with revelatory experiences of the Living God) of his theological enterprise.

[5] Bieler, “Place of Saint Patrick”, 92. Hanson, Life and Writings, 47. Hanson notes that, “There are occasions when he uses a biblical phrase or sentence because no other means of expressing himself comes to his mind.”

[6] Hanson, Life and Writings, 46. Hanson rightly notes the curiosity of Patrick forsaking “the most widely used Patristic hermeneutical device, that of allegory.” At this point it is also worth calling attention to the question of memory. Lynch (125) and Bury (166-167) both suggest that Patrick relied on memory in the composition of the Confessio.  While this is undoubtedly true on a large scale, especially for Patrick’s nearly innumerable allusions to scripture, it would be simplistic to label Patrick’s employment of scriptures as merely from memory. More accurate would be categorizing many of his allusions and quotations as what Walter Ong labeled “secondary orality”, where an author recalls a tradition previously encountered in a written medium and then reproduces it without continued visual contact with that text. See Walter Ong. Orality and Literacy. New York: Methen & Co, 1982; Reprinted, London: Routledge, 2002. 6f.

[9] Lynch, 118-121. On this, Lynch writes, “Patrick may be a poor writer, but that does not matter because God speaks to him (just as he must speak to the Irish). As long as God speaks, Patrick can put his opponents in an untenable position.”

One thought on “SSP: Patrick’s Use of the Scriptures”