Patrick’s overarching approach to the scriptures in hand, I now turn to some more specific considerations of his citations from the Old and New Testaments. Of central importance for Patrick were the Gospels (primarily Matthew and Luke), Pauline Epistles (especially Romans and the Corinthian correspondences), and the Psalter.[1] To briefly touch on the value of these writings for Patrick, the Gospels served not only as the source for knowing Christ Jesus, but also provided the missionary impetus which guided Patrick’s life. His quotation of Matthew 24:14 and 28:19-20 in Confessio 40 stands as the clearest example of how these biblical texts provide the foundation for Patrick’s life and work.[2]

The Pauline epistles provided Patrick not only with an apologetic model—especially Paul’s defense of his apostleship in the First and Second Corinthians—but also provided Patrick with much theological insight worthy of being internalized and applied in fifth century Ireland.[3] As an example of Patrick’s adoption and transformation of Pauline themes, consider this statement from Confessio 11: “And although this letter is not a learned one, it is ‘one delivered’ with strength, ‘written in our hearts not with ink, but with the Spirit of the living God.’” Here he quotes from Second Corinthians 3:2-3. But his use of this passage is far from wooden, as he takes Paul’s notion of the power of the Spirit alive in members of the New Covenant and reapplies it to the power of the Spirit at work in his ministry and work, even in the Confessio itself. He thus demonstrates his ability to rearranging Paul’s argument without losing its meaning and yet retains the Apostle’s rhetorical force. 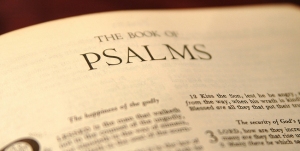 Regarding the Psalter, Patrick alludes to or quotes from the Psalms more than any other writing, especially the hymns of repentance, praise and thanksgiving.[4] Their influence and language are ever on his mind, demonstrating not only his familiarity with the Psalter, but also their importance for his life. These brief considerations of how Patrick employed the Gospels, Pauline Epistles, and Psalter denote the importance that he placed on the scriptures as the source of his theology and literary practices.

One thought on “SSP: The Contents of Patrick’s Bible (Part I)”