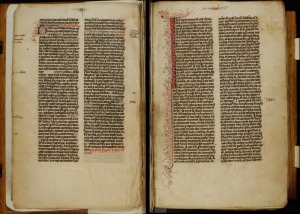 The second major Latin version of the Bible circulating in the Middle Ages was the Vulgate. Commissioned by Pope Damasus in 383 CE, the Vulgate is commonly attributed as the work of Eusebius Sophronius Hieronymus or, as he is better known, Jerome.[1] Jerome’s real contribution to the Vulgate came through his translation of the Hebrew text of the Old Testament (contra the Vetus Latina, which was largely translated from the Septuagint).[2] His revision of the Vetus Latina New Testament was just that—a revision—and in some of the later portions of the New Testament, even that term seems a bit strong for the way in which Jerome used the Vetus Latina to produce a “new” translation.[3] This leads to the complication that, for later portions of the New Testament, it is often quite difficult to distinguish between the Vetus Latina and Vulgate versions.[4]

Despite the Pope’s commissioning, the spread of the Vulgate remained ungoverned during the early medieval period.[5] New Testament portions apart from the Gospels did not find acceptance until the Pelagius and his followers adopted the text in the fifth century, Jerome’s Psalter never caught on, and it was not until the eighth century Carolingian dynasty that the Vulgate truly began to surpass the Vetus Latina.[6] In the meantime,[7] the Vulgate continued to compete with Vetus Latina Bibles.[8] Furthermore, while the Vetus Latina and Vulgate began as distinct versions, they did not remain clearly differentiated for long, as modifications to Vulgate began almost immediately and mixed versions (such as the Book of Durrow and Book of Kells) were common until at least the ninth century.[9]

In the Irish context, the early textual history of the Latin Bible remains shrouded due to limited textual evidence; indeed, before the twelfth century there is but a single Irish manuscript containing anything other than the Gospels or Psalter.[10] It is generally understood that a mixed text developed alongside a more purely Hieronymic tradition that was not to gain the upper hand in Ireland until the tenth century.[11] By examining Patrick’s use of the Bible, we may come to a better understanding of which version(s) of the Latin Bible were extant in fifth century Ireland.

[1] Aland and Aland, 191. David C. Parker. “The New Testament Text and Versions.” Edited by James Carleton Paget and Joachim Schaper. The New Cambridge History of the Bible: Volume 1: From the Beginnings to 600. Cambridge: Cambridge University Press, 2014. 421. Aland’s wider historical introduction is worth noting as well: “The Vulgate is the name given the form of the Latin text which has been widely circulated (vulgate) in the Latin church since the seventh century, enjoying recognition as the officially authoritative text, first in the edition of Pope Sixtus V (Rome, 1590), and then of Pope Clement VIII (Rome, 1592), until the neo-Vulgate. The Neo-Vulgate, which was undertaken on the initiative of Pope Paul VI (promulgated by Pope John Paul II by Apostolic Constitution on April 25, 1979), represented not only innumerable alterations of the tradition text in purely stylistic matters, but more significantly a correction of it to the Greek text.” See Aland and Aland, 190.

[4] Kenyon, 241. To add one more layer of difficulty, “it has come to be recognized that the Vulgate text has its own internal development and history. These factors have an effect upon the way in which we understand the Old Latin, since it can no longer consist of everything which is not the Vulgate, and therefore by implication pre-Vulgate, given the fact that the Vulgate has its own degree of diversity.” See Parker, 421.

[5] Raphael Loewe. “The Medieval History of the Latin Vulgate.” Edited by G.W.H. Lampe. The Cambridge History of the Bible: Volume 2: The West from the Fathers to the Reformation. Cambridge: Cambridge University Press, 1969. 102-154. 109.

[7] And really, to at least some extent, until Pope Sixtus V’s 1590 promulgation.

[9] Loewe, 131. Kenyon, 251-252. Van Liere, 80. Kenyon notes that, “They were so intermingled that nearly every MS represents some different combination of influences.” For more on the post-Patrick history of mixed Latin Bibles, see McNamara, “Non-Vulgate Readings”, 183-257 and Martin McNamara. “The Text of the Irish Latin Gospels.” The Folio (The Newsletter of the Ancient Biblical Manuscript Center for Preservation and Research, Claremont, CA) 6 (1986).

[10] Loewe, 131-132. Kenyon, 253. Helen Simpson McKee. “Breton Manuscripts of Biblical and Hiberno-Latin Texts.” Edited by Thomas O’Loughlin. The Scriptures and Early Medieval Ireland. Turnhout: Brepolis, 1999. 275. On this, McKee writes, “This corpus of Breton biblica comprises gospel-books, and gospel-books almost alone. While it would be foolish to argue that the other parts of the Scriptures were unknown, it is very striking that there seems to be a complete absence of surviving traces of copies of other books of the New Testament or (apart from the Psalter…) of the Old Testament.”

[11] Loewe, 131-132. Loewe’s argument that the early seventh century Codex Ussher I (MS Trinity College, Dublin, A. 4.15) exemplifies the pre-Patrician period of the Irish Latin Bible is worth noting, though tangible textual evidence for this claim remains too vague for any solid judgment on his view.

One thought on “SSP: The Vulgate”