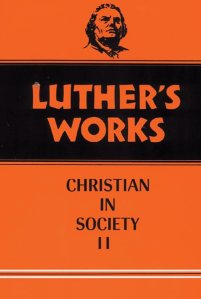 Having considered context and terminology of Luther’s Two Kingdoms, let us now turn to his writing on this subject in On Temporal Authority: To What Extent It Should Be Obeyed. Luther begins Temporal Authority by outlining the Biblical basis for understanding the civil government and the sword as having been established by God. Romans 13[32] “Let every soul [seele] be subject to the governing authority, for there is no authority except from God; the authority which everything [allenthalben] exists has been ordained by God. He then who resists the governing authority resists the ordinance of God, and he who resists God’s ordinance will incur judgment” and First Peter 2[33] “Be subject to every kind of human ordinance, whether it be to the king as supreme, or to governors, as those who have been sent by him to punish the wicked and to praise the righteous” are key passages in understanding the necessity of obedience to those in authority. While these passages constitute the basis for Luther’s understanding of civil government having been instituted by God, passages such as Matthew 5:38-41, 44, Romans 12:19, and First Peter 3:9 make it seem as though new covenant Christians should bear no sword, even if they are civil authorities.

In solution to this problem, Luther espouses the division of humanity into two classes: the kingdom of Christ[34] and the kingdom of the World.[35] The kingdom of Christ consists of true believers who are in and under Christ and which the gospel “teaches, governs, and upholds.”[36] For Luther, those who are in the kingdom of Christ have no real need of temporal authorities or the sword,[37] for the Holy Spirit guides them to love their neighbors and seek justice. Indeed, Luther writes that “Where there is nothing but the unadulterated doing of right and bearing of wrong, there is no need for any suit, litigation, court, judge, penalty, law, or sword.”[38] For this reason, Luther argues that “it is impossible that the temporal sword and law should find any work to do among Christians, since they do of their own accord much more than all laws and teachings can demand.”[39] Luther believes the law was given for the sake of the lawless,[40] that it places men under restraints, preventing them from willfully committing sinful acts, and emphasizes the importance of recognizing grace and its importance.[41]

The kingdom of this world consists of those people who are not Christians and do not act like Christians, and therefore are necessarily under the governance and law of civil authorities. Luther writes that, “There are few true believers, and still fewer who live a Christian life, who do not resist evil and indeed themselves do no evil.”[42] Because of this lawlessness, God has instituted the sword, that they may be restrained from committing the evil that they desire. Without the deterrent of temporal authority and the sword, anarchy and selfishness would reign, leading to mass chaos among not only the people of lawlessness, but also those who belong to the kingdom of God.[43] Thus, as St. Paul writes in Romans 13, the sword exists to correct those who are evil and live outside the kingdom of Christ. Applying the rule and law of the Gospel to the kingdom of the world would not work, for granting Christian freedom to every man would be tantamount to “loosing the ropes and chains of the savage wild beasts and letting them bite and mangle everyone, meanwhile insisting that they were harmless, tame, and gentle creatures… Just so would the wicked under the name of Christian abuse evangelical freedom, carry on their rascality, and insist that they were Christians subject neither to law nor sword, as some are already raving and ranting.”[44] Since the Christian possesses true freedom, the only way to grant such freedom to all men would be to make the whole world Christians. For Luther, because the world is not entirely Christian, “it is out of the question that there should be a common Christian government over the whole world, or indeed over a single country or any considerable body of people, for the wicked always outnumber the good.”[45]

Luther’s construction does not pit a Christian kingdom against a worldly kingdom, nor does it present a vision of a unified Christian kingdom of the world. Instead Luther has divided all people into distinct categories of governance, in order that those who are Christians may be ruled by the word of God in the world, and that those who are not Christian may be ruled by God’s ordained lawgivers. For Luther both kingdoms exist for specific purposes and both must exist for their specific purposes and functions within their spheres of influence; one kingdom cannot be allowed to overrun the other. The church does not constitute the basis of temporal authority, nor does the temporal prince provide a foundation for spiritual authority. Instead the temporal authority of princes and spiritual authority of the church both derive from God and thus purposefully exist to fulfill their respective offices. Luther writes that, “Both must be permitted to remain; the one to produce righteousness, the other to bring about external peace and prevent evil deeds. Neither is sufficient in the world without the other. No one can become righteous in the sight of God by means of the temporal government, without Christ’s spiritual government. Christ’s government does not extend over all men; rather, Christians are always a minority in the midst of non-Christians.”[46] Luther thus argues for a formulation of the doctrine of the two kingdoms that allows each kingdom to hold authority over their respective citizens, and in such a way that does not encroach upon the jurisdiction of the other kingdom.