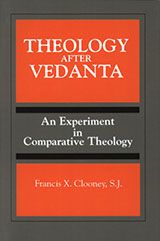 Theology after Vedanta: An Experiment in Comparative Theology offers an important step forward in comparative studies, laying a foundation for a fruitful (re)reading and (re)working of theological conceptions in our pluralistic context. Working from a reading of Advaita Vedanta texts, Francis Clooney provides an experience of “reading together” Vedanta and Catholic theology which directs readers toward an inclusivist reading of traditions external to their own and offers a practical and relevant method for contemporary comparative theology. This review notes the important contributions of Theology after Vedanta, concluding that this work is an important contribution to the methodology of comparative theology, the practice of textual comparison, and the reading of Advaita Vedanta.

Two things must be briefly said to properly situate Theology after Vedanta: First, this work explicitly builds upon and expends the work of Lee Yearly found in Mencius and Aquinas (13f). For his own comparative project Clooney shifts to the Indian context and the threefold task of considering Indian exegetical theology in the Advaita Vedanta school, reconceiving of Christian theology following his reading of Advaita, and exploring any tensions between Advaita and Christian comparative theologies of reading as a means of theological knowledge. Second, this project is conceived of as distinct from the study of religion, comparative philosophy, or history of religions, Clooney instead viewing this as a project of comparative theology. From his perspective theology is inquiry carried out by believers who “allow their belief to remain an explicit and influential factor in their research, analysis and writing” (4). Here Clooney seeks to understand his own Catholic knowledge of God while operating within the boundaries marked by the tensions of the Advaita materials being studied.

Chapter One outlines the general features and topics which impact the engagement of the ‘other’ and reappraisal of a ‘home’ tradition within the comparative process. Central to this task is the importance of reading attentively, which involves working through an unfamiliar body of texts through a purposeful and persevering engagement while allowing those texts to cumulatively (re)organize previous and new concepts and commitments (9-10). Clooney works from the position that Advaita remains best understood as a theology (or scriptural theology) rather than philosophy (or philosophical theology), and understands the texts of the movement to provide the optimal opportunity for delving into the Advaita theological program. Most important are the Uttara Mimamsa Sutras (4-5th century) and Advaita commentaries, especially Sankara’s Bhasya. For Clooney, the proper reading of the theology of Sankara is one that puts him in dialogue with the commentaries and tradition he engaged in his writing. A central part of this enterprise involves consideration of how scriptural practice in Advaita provides accessibility to non-believers and allows them to take advantage of the dynamics of those scriptures. Clooney thus purposes to trace Advaita’s own articulation of textual truth and learn how to speak about that truth in a way that does not abandon its textual basis.

Next Clooney investigates that ‘texture’ of the text, the requirements and expectations within the text that dictate that the reader properly engage with the text and become its approved reader. Noting that the Upanishads present (without conclusion) a number of systematic possibilities, Clooney argues that texts serve as the privileged vehicle of entrance into Advaita. So important is the right reading of the text for Advaita that even renunciation, liberation from the demands of the text, is meaningful only when found prescribed within the text. For Advaitans, a coordinated reading safeguards the ongoing acts of reading and meditation in order to ensure the proper reading of Advaitan texts. The learning of Advaita is thus effectively a textual process. Clooney also insists that Advaita consists of textual composition, the entire practice of text and commentary. Therefore, to be literate in Advaita is to be familiar with texts, literary practices, developments within commentaries, and subsequent interpretative projects. Those who engage in Advaitan textual practice are offered a path to the truth of Brahman through the gradual process of making right distinctions.

In his third chapter Clooney engages the Advaitic construction of meaning in the Upanishads and the way Advaita directs its readers toward textually-situated post-textual truth. Central to this task is comprehending how the truth claims of Advaita Vedanta coordinate with their permanent textuality and recognizing that the continued emphasis on reading the text demonstrates the text’s function as an indispensible field of engagement with the truth of Advaita that can only be accessed by the process of engaged reading. The truth of the text is thus accessed only by increased skill in reading and reasoning properly. This skilled reading eventually leads the reader to the truth of Brahman which is beyond the words of the text, a reasonable, world-encompassing, and inquiry-demanding truth that is firmly situated after textual knowledge accessible only through the text. While aware of the limitations of language and deeply invested in the experience of Brahman, Advaita’s insists upon the mediation of Brahmanic knowledge through texts, and thus requires acts of skillful reading. These first three chapters demonstrate the paradox of Advaita, that there is universally available truth which commands compliance, but it is only accessible via certain prescribed terms of reading and mastering the truths of the text.

In his fourth chapter Clooney turns to what is required from the reader of the text, the student of Advaita. Here he explores the tensions between the truth of the text and the descriptions of proper reading, demonstrating that since truths beyond the text are only gradually mastered, Advaita reflects a tension between simplicity of knowledge and the complexity of the reading process. Whereas the ‘fault line’ of simple and complex reveals a series of tensions, Advaita posits that the balance between simple knowledge and complex ritual context within the renunciation of action parallels the implications of textual knowledge where a “competent performer of rituals is the person for whom independence from rituals becomes a real possibility” (147). Advaita’s truth is thus universally available to all, though mediated through technically articulated texts which may only be properly read by those possessing the right balance of skills. By the end of this chapter, Clooney notes that the preceding chapters have demonstrated access to Advaita through textual knowledge alone, and that such knowledge is only possible through the paths of experience and reason that enable one to successfully read Advaitan texts.

Although an experiment in comparative theology, Theology after Vedanta does not offer an explicit comparison of Advaita Vedanta and Catholic theology until its fifth and final chapter. Here Clooney offers suggestions about how one might “read theology and articulate theological truth after one has become at least initially familiar with Advaita” (154). However, he insists upon not drawing firm conclusions from this reading, and instead focuses on discovering the important activities and changes that precede any comparative conclusions. This sort of comparative process creates a new link between sources that do not seem to be historically connected or similar. The task of Theology after Vedanta is a comparison of Aquinas’ Summa Theologica and the Uttara Mimamsa Sutra’s (156f). As these texts “meet, resist, and intrude upon one another” they force readers to orient themselves towards the materials in constructive new ways (186-9). Thus readers who are even somewhat proficient in Advaita may approach a text like the Summa to find significant theological and literary insights that only arise as the result of a comparative reading. Instead of viewing comparative projects as battlegrounds where truth is being attacked, this method of comparative reading necessitates approaching theological truths through the lens of texts and a (re)reading of textual interpretation. For Clooney, an important task of comparative theology is reconstituting the questions posed by the theology of religions, with Christian comparativists approaching the table as inclusivists who neither abandon their starting point in faith in Christ nor imagine the world so narrowly that they excise the rest of the world. In this view, Christians may learn much from reading Advaita with Christian theologies, which would provide an educational experience not possible by reading only within one’s own tradition. This realization directs readers of Theology after Vedanta to continue comparative work of their own, to compose their own conclusions as part of the ongoing comparative project of which Clooney represents only a portion.

Overall, Theology after Vedanta stands as an extremely useful and provoking work. Perhaps most important is the project’s structure, which offers a versatile methodological model for all manner of future comparative projects. The process of “reading together” texts from diverse theological perspectives presents a meaningful process by which highly different theological programs may be purposefully compared in the highly pluralistic context that is contemporary theological and religious studies. Here it is worth raising questions about the possibility of ‘incomparable’ texts. Clooney writes that, methodologically, one need not compare the similar texts, or even the most important or representative portions of the texts being examined, as finding notable similarities and differences, wherever they might be, remains the task of this comparative project (159). That is, in theory any theological texts from any tradition may be usefully compared to any other theological text from another tradition. In practice, however, there may be some pragmatic limitations to this method. Not every theological text from every tradition offers the same level of usefulness in comparison, nor do all texts discuss meaningfully comparable concepts or ideas. At some point it seems likely that texts may be so divergent or opposed that little of value may be gained from the comparison, either from the perspective of personal faith or academic research.

A second significant aspect of Theology after Vedanta is Clooney’s willingness to work from the perspective of faith (8). Given the complexity of the contemporary theology, the advantages of theological thought influenced by engagements with multiple textual traditions offers an important resource for continuing theological thought as a reflexive basis for creating relevant and substantial dialogue. Indeed, an integral part of Clooney’s project involves advocating for a more balanced and favorable attitude toward theological study (28). The innovative process of employing the text of another tradition as a source of new (or at least newly framed) observations regarding one’s own tradition suggests lifetimes of future comparative work between even the smallest religious communities. When readers approach the texts of differing traditions as “faith seeking understanding” (of the Ultimate or another issue) from their own understanding-seeking faith, Clooney demonstrates that valuable insights may be gleaned. In this way, Theology after Vedanta serves as an important paradigm shift for comparative studies in general, and Christian theological comparison in particular.

Perhaps the most unsatisfying aspect of Theology after Vedanta is the lack of implications for Clooney himself. After chapters of investigation into Advaita and then a comparative “reading together” of Aquinas and Advaita, there are precious few implications for Catholic theology apart from aforementioned observations on the comparative process. From the start this work is clearly the foundation of the comparative process. Since the value of the comparatives practices advocated here will only be known by their final performance, we must thus “leave open the question of the use of the models in any particular comparison, while inviting the reader to complete the process initiated here” (175). This caveat, however, does not make the exclusion of concrete conclusions any less disappointing for those who have worked their way through Advaita and its comparison with Aquinas.

In conclusion, Theology after Vedanta is an important contribution to the methodology of comparative theology, the practice of textual comparison, and the reading of Advaita Vedanta. Clooney’s process of comparative reading together, which emphasizes the skillful reading advocated in Advaita, offers a useful foundation for comparative theological projects. Clooney urges Christian theologians to read outside their own traditions as a meaningful theological enterprise, and successfully employs Advaita Vedanta in the production of an effective comparative reading.