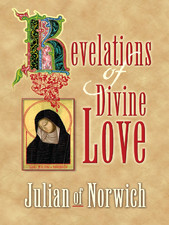 In the history of the great theological and spiritual tradition known as Christianity, there have been a plentitude of insightful and profound writings by a heterogeneous mix of individuals and communities. In the nearly two millennia since the Jesus Movement began, only a choice few of these works have risen to the become the proverbial ‘crème of the crop.’ In considering devotional literature, especially that of the European medieval period, one finds such a seminal writing in Revelations of Divine Love as recounted by St. Julian of Norwich.[1] Long a favorite for both spiritual and academic treatment, Revelations yet provides modern readers with a wealth of insights concerning the sixteen revelatory experiences of which Julian writes and reflects. Revelations continues to demand attention and study, as it presents a clear example of fourteenth century European monastic Christian piety and additionally evidencing a rich literature for potential personal application in spiritual reflection and devotion. In this review, we will sketch the contours of Julian’s account before turning to consideration of the importance of understanding her revelations in today’s context. Though brief, we hope to demonstrate in this review that, while some of St. Julian’s showings and theological insights may seem antiquated in our postmodern context, her insights continue to provide contemporary readers with many academic and spiritual insights.

In Revelations of Divine Love, the fourteenth century anchoress now known as St. Julian of Norwich recounts and reflects upon sixteen divine visions or ‘showings’ of God’s revelatory love that she experiences on over a several hour period during the 8th of May, 1373.[2] After introducing the revelations, her prayers for gifts from God, and the occasion of her revelations, Julian describes her sixteen revelations and provides her reflections upon their meanings. In her first revelation, Julian was shown the Holy Trinity,[3] and in her second showing the fall and redemption of man,[4] leading to the third, which demonstrated the total goodness of God.[5] Her fourth through seventh revelations showed Julian Christ’s removal of sin and humanities cooperating with God’s grace.[6] In Julian’s eighth through twelfth revelations, she was shown the sufferings of Christ and the Blessed Virgin Mary, as well as the joy and blessing that resulted from the pains of the passion.[7] Julian spends a great deal of time recounting and reflecting upon her thirteenth revelation, which was primarily concerned with questions concerning evil, suffering, and sin.[8] The fourteenth and fifteenth revelations focused on prayer and the abandoning of anxieties concerning evil and suffering, which had continued to plague Julian following her thirteenth revelation.[9] Following this Julian recounts her temporary loss of faith in revelations;[10] however, she recounts in her sixteenth revelation being rescued from her doubts and being shown the indwelling of God in her soul.[11] The duration of Revelations includes a compilation of Julian’s reflections over the fifteen year period between her being shown the revelations and the writing of her final account.[12]

Upon reading Julian’s accounts, one is struck by the breadth and depth of her showings and the incredibly personal nature of the revelations and their content. However, in interpreting the Revelations it seems important to note that prior to experiencing these showings Julian petitioned God at some length for three “gifts of God,” namely knowledge of Christ’s passion, a sickness of the body at young age, and three “wounds” of contrition, kind compassion, and willful longing toward God, all three of which she experiences through her revelations.[13] In today’s context one certainly has doubts concerning the authenticity of a religious experience that occurs following a person’s expression of extreme desire to encounter such an experience. On the other hand, though Julian asked for the gifts of God that she received in these revelations, it also remains imperative to note her incredulousness and skepticism of the reality of her visions at various points throughout the showings. Julian had many questions concerning the content and message of her revelations, especially concerning evil, sin, and suffering, topics that she reflects upon more than any other section of Revelations. Additionally, Julian seems to have had serious doubts (at least at one point) concerning the authenticity of the visions themselves, as she spends a chapter expressing her doubts that stem from the physical and emotional pain that she has experiences as a result of her showings.[14] These reflections and questions seem to indicate that Julian herself was inclined to a level of self-reflexivity and critical examination of her experiences that did not necessarily predispose her to experiences such as the showings. Thus, while we must continue to read and examine the Revelations somewhat suspiciously from an academic perspective, it must be noted that Julian exhibited a certain amount of credulity that would seem to lend support to her claims of receiving authentic showings. 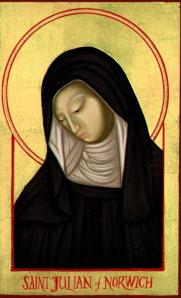 Additional topics of note that the Revelations raise include the very interesting nature of the progressing revelatory experiences, which build upon each other in a rather neat linear fashion. Certainly Julian had a good deal of time to reflect upon her revelations and come to her own conclusions before dictating the account, but one remains curious as to the significance of ordering, redaction, and editing that the account underwent in Julian’s personal reflections before finding its final and rather ordered form. Also one can raise a number of inferences concerning Julian’s background based on various textual clues, such as her apparent knowledge of Neo-Platonic thought,[15] use of Augustinian concepts and language,[16] and possible life as a Benedictine.[17] What role each or any of these or additional factors played in the formation of Julian’s predisposal to, experience of, or reflections on her revelations appears to be speculative at best from the materials that are available. Additionally, Julian’s somewhat odd conception of the relationship between sin and predestination raises potential question concerning not only her theology, but perhaps regarding her canonization in the Roman Church as well.[18] For further research, Julian’s conception and employment of the Blessed Virgin Mary, especially as conceived of in her eleventh and twelfth revelations, would constitute a potentially fruitful area of comparative research.

As this brief introduction to the depths of the Revelations of Divine Love has demonstrated, the revelations of St. Julian of Norwich remain full of plenteous material for both academic and spiritual reflections and study. While the very conception of receiving revelations from God in the form of multi-sensory visions may seem antiquated and superstitious in our postmodern context, Julian’s perspectives and insights should cause modern readers to reflect not only upon the potential veracity of her revelatory experiences, but upon a good number of other topics and concepts as well. Julian’s conclusion concerning the importance and empowerment of God’s divine love, in addition to her other insights, can provide not only a text for rich academic study of medieval European spirituality, but also spiritual insights as well. For both of these reasons this reviewer suggests St. Julian of Norwich’s Revelations of Divine Love to the reader.