Earlier this year, my family embarked on an excursion to the wild western part of our great nation, where we were summoned for my brother’s wedding. Going for drives—especially long ones—is something that I rather enjoy, even with an infant in tow (though I should note she has always been quite generous with her patience when locked in her car seat for extended periods of time). Thus, we decided to extend our wedding trip and spend a few days taking in some of what California, Nevada, and Arizona had to offer.

This trip was special for several reasons, not the least of which was the occasion for our visit and the fact that it was our three-person family’s first real vacation together. Further, this was my wife’s first time traveling to the American West (unless you count Topeka, Kansas, which you shouldn’t) and seeing some of the vastness and beauty of God’s good creation. Of course, one of the great benefits to long car-rides is the opportunity to reflect. Below are some of the random thoughts that crossed my mind during my 2,000 miles of driving this past week.

The United States is a big place. Having traveled extensively throughout my life, this is something that I can intellectually assent to without much difficulty. But taking the time to pass through each mile of that vastness, to experience some of the bigness, makes that size somehow more palpable, more understandable. For me at least, big numbers are often hard to truly comprehend without some frame of reference: being able to track 30 hours of driving on a map provided some needed perspective on the size of our nation. Similarly…

The enormity of mountains is humbling. Upon landing in Las Vegas, we immediately noticed the mountain ranges to the north. Our conversation eventually turned to the actual size of these behemoths, the largest of which dominated the landscape to our east. Being at some distance, they appeared to be of modest size—until we came to realization that we had been trying to drive past the same couple of mountains for over an hour. My car was but an infinitesimal speck in comparison. How great is our God, the maker and mover of mountains? (Ps. 65)

Small towns are fascinating. Our time in Nevada was primarily spent on US Highways, which afforded us the opportunity to pass through several small towns. Some of these cities were anything but, a collection of several weather-beaten homes with neither an obvious reason for existence nor any clear place to find necessitates. Do people really drive 30 miles for gas, milk, and bread? Some of these towns were the epitome of Western charm; others were only shadows of better economic times; all were utterly fascinating to pass through. 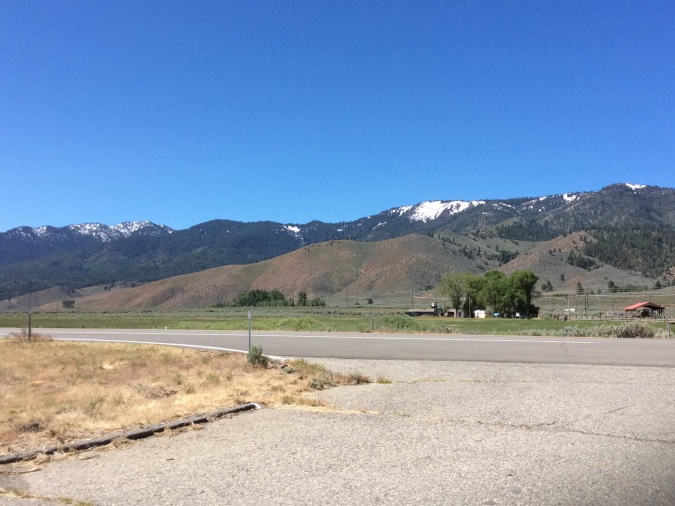 There is so much space. The vast emptiness of much of the West caught me somewhat by surprise. Here in the Midwest, we have cities filled with people and country areas filled with fields. But even when you live in the country, you can still see your neighbor’s lights at night. This simply was not the case in much of Nevada, Arizona, and (it seemed) California. There would be trees, brush, even fields of olive or pistachio. But there were not homes or people. There was an emptiness that was, at times, almost surreal. Are the cars on this section of highway the only people for miles around?

Severe environmental concern makes more sense. Only you can prevent forest fires. Conserve water. Is growing food wasting water? Now entering the Southern California Water Conservation district. Do you have a defensible position around your home? These are but some of the constant signs that we saw on our trip. Nearly everywhere we went, water and fire were serious concerns. Whatever you think about Climate Change or environmental issues, the reality of drought and the possibility of uncontrollable fires seems likely to compel concern for our world. Lake Mead, the reservoir created by the Hoover Dam and the water source for Las Vegas, receding; farms doing everything they can to catch and preserve water for their crops; the metropolises of California pumping out smog and trash daily. Life among these realities would make me even more concerned about the future of our planet too.

Arizona needs to fix some of their highways. There are some seriously bumpy and, quite frankly, almost dangerous sections of interstate in Arizona.

Creation truly is beautiful. There is so much beauty in our world, a seemingly unfair amount of which resides in the Western United States. Pictures of the Pacific Ocean are nice, but they do no justice to its magnitude. Go-Pro flyovers of the Grand Canyon are cool, but they cannot take your breath away like the real thing. Hearing about the size of Redwoods from a friend is interesting, but to stand before their towering pinnacles is awe inspiring. Observing mountains from a distance may be humbling, but to walk among their crowns is without comparison. God has given us a beautiful world, one which we should celebrate and enjoy.

What experiences have allowed you to spend serious time in thought? What are some of the insights you have gained from everyday life?

One thought on “Random Thoughts from a Western Adventure”