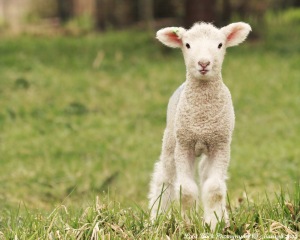 The image of the Lamb appears some twenty–nine times in Revelation, making it John’s favorite way to visually portray Jesus.[1] A number of competing conceptions of what this Lamb–image indicated to the original audience of Revelation have been offered. David Aune argues that the Lamb functions as the narrative guide to the “mythical narrative” of Revelation, similar to Virgil in Dante’s Comedia.[2] Yves Congar suggested that the Lamb should first be understood as the Passover sacrifice and the suffering servant of Isaiah.[3] Most convincing are conceptions of the Lamb which combine these motifs of guide and sacrifice, interpreting Lamb as the central Christological focus of Revelation, the slain and resurrected Lamb now leading his people to God.[4] Revelation’s portrayal of the Lamb clearly highlights its eschatological and judicial roles, as the Lamb leads the Christian communities (7:9–17; 14:1–5; 21:9–22:5) and makes war against the enemies of God on earth (12:10–12).[5]

However, for all of the Lamb’s sacrificial and eschatological significance, devotion to the Lamb remains most noteworthy. Revelation 5:11–14 serves not just a statement of the Lamb’s significance, but also worship of the Lamb. He is worthy, mighty, wise, honored, glorified, and blessed—the same attributes of Yahweh which make Him worthy of praise. Thus the Lamb shares divine honors with God Almighty (5:13; 7:10–17; 21:6). Later, the elect are sealed with the name of God and the name of the Lamb (14:1).[6] Finally, in the New Jerusalem God Almighty and the Lamb stand at the center of all life and religious activity, illuminate the city, and provide for all who dwell there (21:22–22:5).[7] In short, the hymns to the Lamb in Revelation make clear the fact that the Lamb should be worshiped alongside God, intimately linking Jesus to Yahweh.[8] This devotion to Jesus will be explored further below. For now, suffice it to conclude that for John the image of the Lamb conveys Jesus’ sacrificial, eschatological, and devotional importance.

[5] See Slater, 200–5, for some pertinent remarks on the Lamb’s “revenge upon oppressors” theodicy motif.

One thought on “Jesus in the Apocalypse of John: The Lamb”