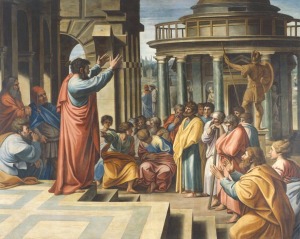 Simplicity of Attribution: The criteria of attribution simplicity states that when the wording of any reference may be explained on the basis of a known source, attribution to that source remains preferable to claiming oral tradition or unknown sources.[i] This does not mean a rejection of the possibility of attributing a citation to oral tradition or lost sources, but rather that the possibility of literary sources—those extant or known but lost—should be exhausted before attribution to non-extant traditions.[ii] In the words of Bruce Metzger, “It is generally preferable, in estimating doubtful cases, to regard variation from a canonical text as a free quotation from a document known to us than to suppose it to be a quotation from a hitherto unknown document, or the persistence of primitive tradition.”[iii]

Purpose in Writing: The purposes of a particular writing may impact the manner in which two texts are related. This applies both to the text being studied and the texts which may be employed in that writing. For example, it should not be surprising that 1 Corinthians finds extensive use in the early Church, as both that letter and numerous early Christian conflicts addressed questions of church unity. Especially important for properly ascertaining the purposes of literature in this period are “exegetical motifs.” In the words of James Kugel, “An exegetical motif is an explanation of a biblical verse (or phrase or word therein) that becomes the basis for some ancient writer’s expansion or other alteration of what Scripture actually says….” [iv] While an author’s purposes may not directly align with those of the writings they are employing, the interpretive practice of “exegetical motifs” allowed for relatively easy modification of literary materials in accordance with their recasting of existing materials.

To these ends, this paper first examines the context of Justin Martyr and undertakes a survey of his use of Greco-Roman, Jewish, and Christian sources in the First Apology. Next, this study turns to Theophilus of Antioch’s Ad Autolycum, exploring his context and general enlistment of written sources. Finally, a comparative analysis of Justin and Theophilus is offered, focusing especially on the manner in which these authors employed the Gospel of John in their writings and the implications of this investigation for understanding second century Christianity.

One thought on “Scripture among the Apologists: Method II”