Happy Halloween! Or Happy Reformation Day. Or Happy All Hallow’s Eve. Or maybe I should just wish you all a Happy(-ish) Monday.

For many Christians, October 31 seems marked with uncertainty. Yes, we all enjoy seeing (and buying, but this isn’t the place for personal confessions) the gigantic bags of candy in the grocery store. And most of us enjoy seeing hilariously clever punny costumes. But for many others, the celebration of Halloween brings us back to that seemingly never ending question concerning how we should interact with culture. Halloween today seems far less innocent than it did even ten or fifteen years ago. Back in those days, as Richard Mouw has noted,

“Witches and warlocks were fictional characters. Today Wicca and neo-paganism are a fairly visible presence in the religious marketplace. More significantly, Halloween is no longer mainly for kids. It has become an adult festival as well—identified in many minds as an opportunity for a bit of Dionysian abandon.”1

Not surprisingly, some people feel the need to withdraw from the spectacle of Halloween as the representation of evil. However, many of these same people often form what amounts to a Christian sub-culture on (or around) Halloween, holding Harvest Parties, Hay Rides, and Trunk-or-Treats as a means to counteract the dangers of celebrating Halloween elsewhere.

On the flip-side, other Christians have embraced Halloween, with all of its fascination with the undead, non-human, and the like. A couple years ago Timothy George summarized this interest well, and commented on certain American Christian’s shift toward Horror Houses and “Entertainment Evangelism”:

“There are many variations on this theme: a hayride through hell, a demon-guided stroll in a cemetery, a train trip of terror, and so on—but all presentations have three things in common. First, there is a series of mini-dramas, gruesome, death-centered tableaux always presented in lurid, edgy (some say cheesy), soap-opera style. These run the gamut from smoking-related cancer deaths to school shootings, teen suicides, fiery car crashes, botched abortions, homosexual teens dying of AIDS, and all kinds of family traumas—domestic violence, divorce, sex abuse (including incest), and the like…. After the “incidents” come the consequences, namely, a visit to hell. “Hell” is a dark, smoke-filled room complete with strobe lights and the shrieks of tortured souls. The dénouement is a Mel Gibson-esque portrayal of the crucifixion followed by a personal appeal to accept Jesus Christ. Sometimes an actor impersonating Jesus makes the appeal himself in a breath-minted, nose-to-nose encounter with those presumably shaken by what they have seen.”2

These events are often the opposite of a church sponsored trunk-or-treat. Instead of creating a culture of counteracting Halloween, these affairs have the effect of creating a culture of “baptized” pagan Halloween, complete with emphasis on the evil, undead, and non-human. Of course, there are also many who engage in more, shall we say, unethical forms of entertainment during the celebration of Halloween.

My point here is not to reject these responses to Halloween out of hand, but rather to note three prevailing attitudes among Christians concerning their relationship to Halloween in particular and American culture more broadly: that of retreat (creating a Christian sub-culture), co-option (using cultural forms and ‘baptizing’ them for ministry purposes), and  accommodation (buying in wholesale to the message and methods of culture). Despite the pervasiveness of fleeing from culture, co-opting culture, and joining culture, all of these options struggle to find an appropriate balance of an “in the world but not of the world” ethic that Christ calls us to live out.

As is increasingly (and rightly) noted this time of year, the current holiday known as Halloween seems to have began as All Hallow’s Eve — the day before All Saints Day. Whatever else the celebration of Halloween may have been or whatever else it may be today, October 31 was once a day of special preparation before God, a time to remember all those who have gone before us and witnessed to the truth of Christ. Amidst constant reminders of death that accompany Halloween, we can remember the examples of those exemplars of faith who have gone before us. This may mean something as simple as reflecting upon the live of a loved family member or friend and recalling the lessons of their life and death. For others, this may involve the invocation of the saints and martyrs. Along with remembering, we too are called to witness to the truth.

Additionally, we may also use this time to reflect upon the evils of our world. I’m not sure about you, but seeing representations of the fiendish undead (especially well done ones) serves as a powerful reminder of the evils that exist in our world. Sure, the skeleton on my neighbor’s house is comical, but encountering a non-decorative skeleton—perhaps in an area ravaged by disease or war—is rarely funny, and more often cause for horror and suffering. I may be abstracting too much from the inflatable witch and ghost that I pass on the way to work, but these images should remind us of the deprivation and wickedness of sin, suffering, and death that are a part of our world.

Finally, this season provides Christians with an excellent opportunity to engage with those who believe in and practice witchcraft, Wicca, and paganism. Instead of being dismissive, we can respectfully learn about and dialogue with people in our lives for whom Halloween represents something much more than just a day for scoring some candy. This engagement should not be strictly apologetic in nature, but should have at its heart a willingness to love people and offer them the power of him who has truly conquered the grave, the Lord Jesus Christ. 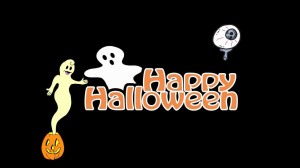 Jesus taught and healed people in different ways depending on the context of their situations. Similarly, different Halloween contexts call for different ways of interacting with people. If your community is obsessed with the occult, primarily rural, or generally isn’t safe for children (as certain parts of my city are), then having an alternative form of Halloween such as Trunk-or-Treat may be an excellent way to engage your community during Halloween. For other contexts, a well done and theologically sound “House of Horror” in some may be appropriate. For many, simply having conversations about the Christian origins of Halloween with other parents while walking house to house may be the best form of witness. For others, finding modest, tasteful, and conversation-starting costumes would be a great place to start.

Like so many other things, Halloween represents an opportunity for Christians to seek the balance of living as witnesses in the world while not giving into the world. Neither abandoning nor thoughtlessly co-opting Halloween are appropriate ways to live the Gospel in our American context—so go, and redeem Halloween with your witness.

One thought on “Redeeming Halloween”