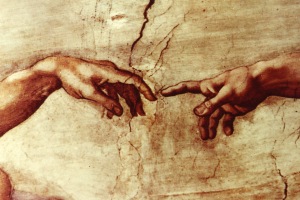 Central to the considerations here are the “composite citations” of the Jewish Scriptures, where Clement fused together different passages and presented them as a single citation. There are several characteristics indicative of this type of citation. First, these composites often align with the meaning rather than exact verbal structure of their sources and come from the same book of the Jewish scriptures.[1] For example, 1 Clement 32:2 combines Genesis 15:5 and 22:17, saying “Your offspring will be like the stars of heaven.”[2] Here Clement is more concerned with the promise to Abraham than with an exact replication of Genesis’s terminology. Second, these citations are often from the same source.[3] For instance, 1 Clement 26:2 reads, “You will raise me up and I will praise you, and I lay down and slept, and I arose, because you are with me.”[4] This is apparently a composite citation of Psalm 3:6 and 28:7, and possibly incorporates Psalm 22:4 and 87:11 as well.[5] In addition to the thematic similarity between these passages—God’s presence with the believer—this passage also stands as an example of Clement’s tendency to conflate passages from the same written source.

Third, when the sources being compositely cited are not from the same book, they are almost always conflations of similar themes found in the same genre of work. Consider 1 Clement 50:3, which offers a composite citation of Isaiah 26:20 and Ezekiel 37:12, both of which contain prophetic material on the restoring work of the Lord. Fourth, while composite citations are generally presumed to result from recalling passages from memory, Clement was not above creatively citing his sources. For instance, 1 Clement 38:3-9 contains a long quotation from Job, almost all of which is in exact agreement with the general Septuagint form of Job 4:16-5:5.[6] Incorporated into this quote, however, is a clause from Job 15:15, suggesting that either Clement recalled the passage almost precisely from memory or (more likely) that he felt free to insert another portion of Job’s narrative into this quotation to better draw out the meaning of the passage he was citing.[7]

Together, these composite citations of the Jewish scriptures demonstrate several important characteristics of Clement’s writing style and approach to the citation of written sources. First, they indicate that Clement was primarily interested in the meaning of a passage and not its bibliographical information, a trait common to literature of the period.[8] Second, composite citations indicate quotation of at least some sources from memory. Third, this type of citation suggests that Clement was willing to gloss quotations with other passages in order to draw out theological meaning. Fourth, these examples suggest that composite citations increase when thematic similarity exists between passages. Fifth, quotations from memory are more likely to combine multiple passages from the same book or genre of literature. And sixth, composite quotations may conflate more than two passages. These characteristics of composite citation—evident in examples from writings (the Jewish scriptures) which Clement clearly viewed as important sources for properly living the Christian faith—serve as a paradigm for an examination of Clement’s use of specifically Christian writings.

[7] The possibility also exists that Clement was drawing upon a hereto undiscovered version of Job or a liturgical device with this passage. While must be admitted as possibilities, this study’s adherence to Metzger’s dictum—“It is generally preferable, in estimating doubtful cases, to regard variation from a canonical text as a free quotation from a document known to us than to suppose it to be a quotation from a hitherto unknown document, or the persistence of primitive tradition.” (See Metzger, Canon, 73 n47)—suggests that those options are implausible explanations.

One thought on “Scripture in 1 Clement: Composite Citations of the Hebrew Bible”