This post concludes a brief series of reflections on Jay Ford’s The Divine Quest, East and West. 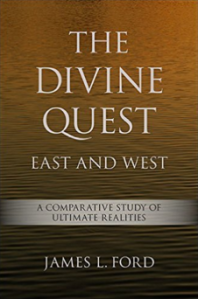 The Divine Quest: East and West provides an engaging, insightful, and balanced approach to considering the Ultimate in three (or four) major religious traditions. From the perspective of one most familiar with Christianity, I especially appreciated the way in which this book uses that tradition as something of a starting point for engagement with two traditions I am less familiar with, those of “Hinduism” and Buddhism. Throughout, I have been impressed by Ford’s consideration of context, conceptual development, and attention to methodological concerns involving reflexivity and the use of appropriate definitions and categories. The commitment to nuanced language and constant reminders of contextual contingency and the purposefully limited claims of this work have been both thought-provoking and helpful guides for my own work. While it would have been interesting to devote a bit more time to Judaism and/or Islam, I believe The Divine Quest will serve as a useful guide for exploring conceptions of ultimacy and the process of tracing the development of various religious imaginations.

Yet, while my reflections upon this book as a whole have noted my appreciation of the balance that has been exhibited, I was surprised by some of the instances of seeming imbalance in the final chapters. At the end of any work one must lay all of the proverbial cards out on the table (or be accused of not providing substantive conclusions, ala Clooney). Given the prominence of the Asian traditions in this work as a whole, I was somewhat surprised to see so much of this final chapter devoted to the deficiencies of the Christian tradition.

I will be the first to note that my own tradition has failed on many accounts, but I was expecting more of “positive program” based upon the insights of the Asian traditions that I found in this final chapter. Useful and summarizing connections are drawn, to be sure. However, to my mind this chapter read more like a conglomeration of (earlier discussions at Pursuing Veritas) Taylor and Wright than conclusions based out of the Asian context that could readily be applied to the Christian situation. While it is clear that most of the audience for this book will be coming from a context of Christianity (if not professing Christians themselves), there were only a few points where I saw engagement with something other than (to use these terms loosely and descriptively, not pejoratively) a liberal and/or postmodern theological perspective. These are certainly useful and fit well within the stated Bergarian context and desire to bring the Asian traditions into contact with the schemata provided by Wright and Armstrong. In conclusion, however, the overall tone of the later portion of this chapter was not quite what I was expecting.

One thought on “The Divine Quest, East and West (Part III)”