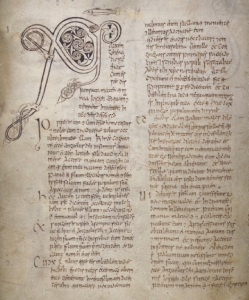 The Book of Armagh

As Patrick’s literary output constitutes the “earliest surviving documents written in Ireland”, the importance of these documents can hardly be understated.[1] However, many of the writings traditionally associated with Patrick have been deemed inauthentic. The three Dicta Patricii (Sayings of Patrick) are generally viewed as later historical misattributions—though Hanson argues at least one is authentic.[2] There are also a variety of synodal documents (Synodus I S Patricii and Synodus II S Patricii) and poems attributed to Patrick (Hymn of St. Secundinus, “Breastplate of St. Patrick”, and Hymn of Fiacc, in Irish Genair Patraic), these also now understood as likely not originating from the Irish saint.[3]

Yet only two writings are universally understood as authentically Patrician: the Epistola ad Milites Corotici and the Confessio.[5] The Epistola ad Milites Corotici consists of a short letter to a British ruler (or prince) and his soldiers which lays interdict upon their land (often understood as Strathclyde) in response to their killing of some Irish Christians and leading others into captivity.[6] Most scholars believe this letter to have been written before the Confessio and some suggest that Patrick’s apparent disregard for diocesan boundaries led to criticisms requiring the writing of the Confessio.[7] This theory seems likely—at least as the impetus for some of the criticisms that Patrick addresses.

[4] Richard P.C. Hanson. Saint Patrick: His Origins and Career. Oxford: Clarendon Press, 1968. 72-75. Morris, “Introduction”, 1-3. Of his later Lives, only the Muirchu Maccu Machteni’s vita in the Book of Armaugh and Tirechan’s vita (also in the Book of Armagh) have any potential historical value, though these documents must be carefully examined. See Hanson, Life and Writings, 15-16.

One thought on “SSP: The Writings of Patrick”