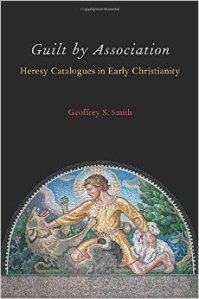 Since the publication of Walter Bauer’s Rechtgläubigkeit und Ketzerie im ältesten Christentum in 1934, the issue of discerning orthodoxy and heresy in earliest Christianity has taken on renewed importance. Amidst this reinvigorated study, however, scholars have by-and-large failed to appropriately consider the insights of Christian heretical catalogues, or so argues Geoffrey S. Smith in Guilt by Association: Heresy Catalogues in Early Christianity. In this volume, Smith investigates some of the most powerful weapons in the early Church’s battles for legitimacy and authority, arguing that heresy catalogues should be approached as sources for understanding early Christian boundary-definitions and claims of orthodoxy.

After a brief introduction to the terms of this study, chapter one discusses the origins of the early Christian heresy catalogue, focusing on the influence of pseudo-Pauline literature as an exemplar of the shifting ways in which Christians conceived of their theological opponents. After considerable examination of the Greco-Roman philosophical precedents for heresy catalogues, Smith argues that pseudo-Pauline authors took the first steps toward organizing opponents into genealogical chains of heretics. Pseudo-Pauline literature thereby forms the re-imaginative foundation for later cataloging of heretics.

The second chapter examines Justin Martyr’s role in the emergence of the heresy catalogue tradition. Here Smith argues that Justin likely did not compose the Syntagma against All the Heresies, based primarily upon the advertising language Justin uses in the First Apology and the Greco-Roman practice of amicus literary advertisement. Chapter three explores implications of the claim that Justin did not compose the Syntagma and the diversity of approaches to heresy evidenced in extant second- and third-century heresiological catalogues, including Hegesippius’s fragments, Justin’s Dialogue, the Tripartite Tractate, and the Testimony of Truth. Although Smith avoids raising potentially important questions of chronology, the contention that not all heresy catalogues took the approach of the Syntagma remains sound.

The final chapter argues that Irenaeus’s incorporation of an updated form of the Syntagma in Against Heresies represented a seminal moment in the history of heresiology, wherein rhetorical designations such as “Gnostic” became acceptable practice for Christian boundary formation and claims to orthodoxy. Smith indicates that the Gnostic schools never constituted a coherent sociological reality and that Irenaeus’s grouping of these heretical opponents was an exercise in labeling in order to disassociate their theology. The Nag Hammadi documents prove especially important for Smith’s argument at this juncture, as their lack of self-identification as “Gnostic” forms the crux of the argument that this nomenclature was applied as a heresiological invention.

Guilt by Association stands as a convincingly argued and impressively concise volume. Smith makes his points with deft precision, avoiding the overly rhetorical prose with too often clouds salient scholarly arguments. The narrow scope of this study (focused primarily on the second century) allows Smith to hone in on the definitive and transformative issues of the early Church. The resulting investigation shows this period to be fraught with competing claims of authority and orthodoxy. The overarching arguments of this volume are highly persuasive, including the contentions that heresy catalogues remain worthy of additional attention, the recognition of complex interactions between competing visions of Christian orthodoxy, and the need for consideration of the practice of literary advertising during the second century. Furthermore, Smith’s claims concerning the Syntagma’s unknown authorship and Irenaeus’s creation of the term “Gnostic” are insightful and thought provoking, even for those holding to scholarly paradigms which may problematize some of their underlying assumptions.

At times in this treatment Smith would have done well to exhibit additional nuance, although the obvious concern with brevity and clarity of presentation overwhelm these minor indiscretions. Additionally, it may have been beneficial to treat the complex relationship between orthodox, heretics, Jews, and pagans during this period. For a volume problematizing easy delineations between heresy and orthodoxy as well as the rhetorical functions of heresiological writings, Smith might have fruitfully expanded his allusions to intra-Christian boundary negotiation with discussion of wider issues of self-definition in the Greco-Roman world. These admittedly tertiary concerns aside, Guilt by Association offers much for its readers, especially those invested in examinations of early Christian diversity, Nag Hammadi Gnosticism, and the Pseudo-Pauline letters.

One thought on “Book Review: Guilt by Association (Smith)”