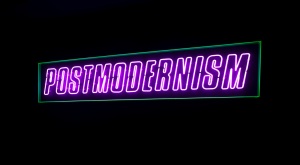 Postmodernism, while notoriously difficult to define and existing in a variety of forms, essentially involves an attempt to move beyond Modernism and the questioning of metanarratives and truth claims due to the constructed nature of human language and reality. With regard to historical methodology, Postmodernism typically functions as a problematization of the Modern and a call to hear the previously unheard “ancient voices that have long been suppressed.”[21] For Postmodern thinkers, narrative is never neutral, but is always ideologically freighted. New intellectual history, therefore, explores the “material embeddedness of ideas and their relation to power” while acknowledging the historian’s situation and interests.[22] Accordingly, “history” becomes understood as distinctly different than “the actual past,” for the practices and structures of historians are always influencing conceptions of the past and synthesizing the past with the present. Berkofer argues that recognition of this way in which poetics impacts historical practice must be understood in order for history to move forward.[23]

Foucault’s method of genealogical investigation has played a seminal role in the formation of Postmodern historical methodology. For Foucault, genealogy records the singularity of events without broaching finality, examines sources beyond those of normal historical inquiry, does not seek to impose a grand metanarrative of interpretation, notes where events are absent, requires erudition and knowledge of historical detail, and requires extensive work among source materials.[24] This type of work yields an “effective history” which does not presuppose a millennial ending to history, but remains willing to uproot traditional conceptions of continuity, recognizes the complexity of the world and its history of entangled events, and affirms that all knowledge is perspective. Sheila G. Davaney helpfully outlines five important orientations of this “emerging historicist” position: recognition of the product/producer nature of reality; epistemological recognition of the localized and relative shape of interests and interpretations; ontological recognition of a humanly situated and influenced reality; affirmation of the anthropological embeddedness of human existence within concrete histories; and recognition of the linguistic nature of engagement, meaning, and interpretation.[25]

[21] Gonzalez, 56-7. See also John Lukacs, “History and Physics: Or the End of the Modern Age,” in Historical Consciousness: Or the Remembered Past (Piscataway, N.J.: Transaction Publishers, 1968), for how the developments of quantum physics reveal an epistemological shift which has undermined the assumptions of the modern age.

One thought on “MHT: Postmodern Critiques of Modern History”