Last Friday, Conciliar Post hosted a Round Table discussion on Martin Luther. I would encourage you go click on over there and peruse the reflections on how Christians from a variety of denominations view the “first” Reformer. My response to this Round Table is as follows: 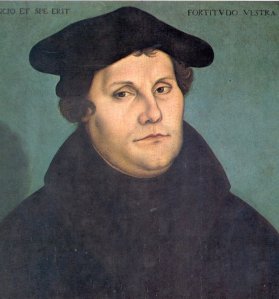 My perception of Luther arises from many experiences with the Luther’s legacy and his writings. I grew up in the Lutheran Church – Missouri Synod—attending both church and school until middle school—and learned much about Luther the Great Reformer there. Every fall we would talk about the Reformation, how Luther valorously stood up to the heresies of the Catholic Church. We would read stories about his life (mostly his post-Diet of Worms “capture” by Frederick the Wise), wait in eager anticipation for Thrivent Financial’s production of Luther, and talk about the central tenets of the Augsburg Confession. The picture of Luther painted at this stage of my life accorded with the idealizing of other great Christians, albeit with that special fervor which accompanied talking about Luther as a “Lutheran.”

From middle school through college a different picture of Luther emerged. For a variety of reasons, my family stopped attending Lutheran churches, which raised questions about just how correct Luther was if we did not have to attend a church bearing his name. Discussions with family and friends began to reveal some of Luther’s darker idiosyncrasies. Exposure to the world of Church History began to challenge first my conception of Luther as an ideal Christian and then began to undermine the narrative of his unique stand against medieval Catholicism. In college, I truly wrestled with Luther and his thought, taking numerous classes on the Luther and the Reformation, even writing my senior thesis on his two kingdoms ethics.

All of these experiences crafted a very different picture than the Luther I had grown up hearing about. Instead of a simple hero of faith, here now was a man of complexity, neither wholly saint nor wholly sinner (a reality I think Luther would affirm, himself being simul justus et peccator). More than anything else, I became pained by Luther’s polemic tone, his harsh and biting words that I cannot totally write off as a historical contextualization. Almost all Western Christians today—Protestant and Catholic alike—would say that some things needed to be changed in the Reformation-era Church. But even though Luther had the right things to say, he often said them the wrong way, resulting in schism and division that no follower of the Lord Jesus should enjoy. This is to say nothing about Luther’s views on other issues, such as his hatred of the Jews that helped foster a German state church that turned a blind eye to the Holocaust. Clearly, Luther was far from perfect.

And yet I still believe that there is much of value in Luther’s life and work. My faith and piety are still strongly shaped by the Large and Small Catechisms, especially the evening and morning prayers which my family often says together. As I have recounted elsewhere, there remains much of value in Luther’s conception of the two kingdoms for today. His “Three Treatises” still stand as important reads for anyone who calls themselves a Protestant. Accounts of his statements at the Diet of Worms should enliven anyone who believes in the freedom of conscience. His engagement with Erasmus on Predestination and Freewill is well worth your read (even though I think he’s wrong). Luther has much to offer contemporary Christians—he is by no means a historical figure of the Church with nothing to offer the communion of saints today. Martin Luther was no perfect man, but he remains well worthy your consideration today.

What do you think about Martin Luther and his influence on Christianity?

2 thoughts on “How I View Martin Luther”