Some time ago I published a brief reflection titled “Bible Translations, Not Inspired,” in which I argued that we must not assume that our contemporary Bibles—because they are translations—are the same thing as the inspired (inherent) words of God. While I don’t want to disagree with that post, I do want to reflect upon the inspiration of the scriptures, spurned on by Jaroslav Pelikan’s Whose Bible Is It?, which I’ve been reading the past couple of days.

Occasionally I will run into someone who holds an unusually high view of a certain version or translation of the Bible. This is true across denomination lines: Catholics have the Apocrypha and the Vulgate, the Orthodox have the Septuagint, and various Protestants have their Scofield Reference Bibles, the King James Version, or the dearly-beloved ESV. And because we have our version of the best Bible, clearly our theology must be more fully informed (and therefore accurate).

But debates about which version of the Bible is best are nothing new. One of the factors which helped separate the synagogue from the Church was which version of the Jewish scriptures was to be preferred, the Greek (Septuagint) or Hebrew text. Likewise, Christians have been arguing about which versions of the New Testament are more accurate since at least Origen’s time (3rd century). Jerome found the Latin bibles of his time so lacking that he (with the affirmation of Pope Damasus I) put together a new (or at least partially new) Latin translation of the scriptures. All that to say that contemporary conversations about the sufficiency and profitability of certain Bible translations seems to be part and parcel of a nearly 2,000 year effort by Christians to understand God’s revelation to humanity in the best way possible.

Of course, there are things that we should learn from history about how we got our current Bibles (but that’s an ongoing project here at Pursuing Veritas). The Bibles of history differ considerably, not so much in terms of content as in sources used, books included, and languages used. Today’s Bibles by-and-large appeal to a wider range of extant manuscript evidence than earlier Christians had access to. Today’s Bibles are also produced with a printing press, meaning that a) the text is quite uniform and b) your Bible is quite inexpensive (or, if you picked it up in a hotel room, free!). You also have the entire Biblical canon in one pandect—one book—which was a rarity throughout much of history. Finally, with few exceptions, if you can read, there is a Bible available in your language.

History also teaches us that when reading the Bible we must be aware of the fact that we are reading a translation, and translation always involves some level of interpretation. So not only are you reading Ephesians in a different language and linguistic context than the Apostle Paul wrote it in, but you are reading an interpretation of that passage by a certain set of Biblical scholars, who have their translation included in a single book full of biblical books. Irrespective of what your views on the authority and inspiration of the Biblical text are, we need to recognize that our Bibles are different than the Bibles to which most Christians throughout history have had access. I don’t note this to problematize our scriptures in any way, only to note that this realization can help us make sense of the Christian past and how that past has influenced the present. 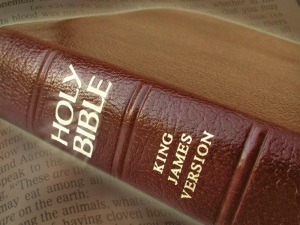 Of course, it would be remiss in this “redux” post to not include some of the most famous errors in English Bible translations, if only to underscore the fact that Bibles are always produced by erring humans, a fact we would do well to remember whenever we pick up a copy of the scriptures. Thus, below are some of my favorite famous (or infamous) Bible mistakes in history:

Matthew’s Bible (1537), A.K.A. “The Wife-Beaters’ Bible”
Proof that study notes and footnotes are not inspired: Notation on I Peter 3:7 reads, “And if she be not obedient and healpeful unto him, endevoureth to beat the fear of God into her head, that thereby she may be compelled to learn her duty and do it.”

Geneva Bible (Second Edition, 1562), A.K.A. “The Place-makers’ Bible”
Matthew 5:9 reads “Blessed are the placemakers: for they shall be called the children of God”. Homemakers everywhere loved this passage for years until it was fixed.

King James Version (1612), A.K.A. “The Printers’ Bible”
Psalm 119:161 reads “Printers have persecuted me without a cause” instead of “Princes.” Rarely mentioned by advocates of the “KJV Only” position.

King James Version (1631), A.K.A. “The Adulterers’ Bible” or “The Wicked Bible”
Exodus 20:14 (the Ten Commandments) reads, “Thou shalt commit adultery.” This version was recalled almost immediately, and only 11 copies are known to exist today.

New English Translation (2001), A.K.A. “The Prostitutes Bible”
Proverbs 2:16 reads, “To deliver you from the adulteress, from the sexually loose woman who speaks flattering words.” In the first printing of the New English Translation, there was a footnote at the end of this verse with a 1-800 number. The translator was writing the notes for this verse on his computer when he got a call and, unable to find a pen, he made note of the number on his computer. Unfortunately, he forgot to erase the number later.

May these examples remind us of the fallibility of human editors, even editors of the scriptures, and our need to continue humble conversations about the words of God, whichever Bible we use.

One thought on “Bible Translations, Not Inspired (Redux)”