Following Knox’s perspective is Joseph Tyson’s work Marcion and Luke-Acts: A Defining Struggle, in which Tyson argues argues for a late compositional dating of Luke-Acts as a response to Marcion during the period from 100 to 150 CE.[91] Tyson understands Marcion to have presented an enormous problem for the church with his rejection of the Jewish Scriptures, and that writers such as Irenaeus and Tertullian were pressed into finding symbolic or allegorical representations of Christ in those scriptures whilst simultaneously using the gospel narratives to present him as something unique.[92] Pauline writings and theology became especially problematic for use by the proto-orthodox, as they constituted the core of Marcion’s theological system, and thus the proto-orthodox created Luke-Acts to combat the challenge of Marcionite Christianity.[93] Tyson thus argues for three distinct versions of the Gospel According to Luke: the pre-Marcionite gospel of roughly canonical Luke 3-23, the Marcionite Gospel which likely included the pre-Marcionite version with some significant omissions and minor changes, and the canonical edition with added prologue, infancy narratives, a re-writing the resurrection, and addition of post-resurrection scenes.[94] This proto-orthodox version of Luke-Acts became the primary anti-Marcionite tool in the early church, eventually becoming formally canonized.[95] Tyson, following Knox, argues that both Marcion and the editor of Luke-Acts used a primitive form of Luke’s gospel. Such actions on the part of proto-orthodox writers demonstrate not only Marcion’s unique position of canon formation, but also how his use on new Christian scripture influenced the great Christian community. 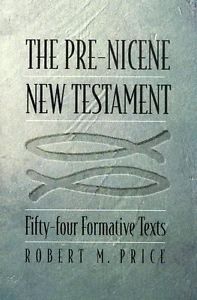 In The Pre-Nicene New Testament, Robert M. Price argues that Marcion’s canon not only formed the idea of a specifically Christian canon and caused the formation of Luke-Acts, but also writes that Marcion was the first collector of a Pauline canon of writings.[96] For Price, Marcion viewed Paul as the restorer of an early Jesus Movement already corrupted by the twelve disciples, and that he sought to use Paul as the source for reformation of the church, a trajectory that was met by the counter reformation of Justin Martyr, Irenaeus, and Tertullian, who began to co-opt Marcion’s idea of specifically Christian scripture.[97] Following Knox in his use of Ur-Luke, Price offers a reconstruction of Marcion’s gospel using Knox, Tertullian, and by taking into account revisions that he argues would have been included in Marcion’s gospel, having been in Ur-Luke’s redaction of the Gospel of Mark, but were assimilated into Acts by the editor of Luke.[98] Ultimately from Price’s perspective Marcion not only formed the first specifically Christian canon and influenced the formation of the canonical Luke-Acts, but he also was the first to collect a Pauline corpus and call for a distinctive set of Christian scriptures.[99]

[91] Joseph B. Tyson. Marcion and Luke-Acts: A Defining Struggle. University of South Carolina Press: Columbia, 2006. 22-3. [92] Ibid., 48. [93] Ibid., 49. [94] Ibid., 119-120. [95] Ibid., 120. [96] Robert M. Price. The Pre-Nicene New Testament: Fifty-Four Formative Texts. Signature Books: Salt Lake City, 2006. Viii. Price includes in this work reconstructions and editions of texts from a variety of schools of early Christian thought, including pre-apostolic writings; a Matthean collection including several gospels; Marcion’s Apostolicon, including Paul’s epistles; the anti-Marcionite texts to Theophilus, Timothy, and Titus; the collected writings of John and the Ephesian community; a Petrine corpus; various Jewish-oriented writings about Jesus, including James, Jude, and the Gospel of Thomas; and a collection of writings surrounding the Pauline corpus. [97] Ibid., ix-x, xii. [98] Ibid., 266-7. Though we have neither the time nor space here to examine Price’s reconstruction of Marcion’s canon, it is worth noting that they generally follow Harnack’s example. [99] Ibid., 265.

One thought on “The Marcion Problem: Canon and Literature Formation (Part II)”