Central to Ephrem’s scriptural presentation of Christ as beyond investigation (i.e., of the same order as the Father) is the relative simplicity of his arguments. Instead of constructing complex metaphysical arguments, Ephrem relies upon the re-presentation of narratives from the Old and New Testament’s to demonstrate Christ’s Sonship. In this post, I reflect upon the simplicity of Ephrem’s rewriting of scripture, as well as briefly consider the role of Tatian’s Diatessaron in his conception of Christ.

As Jeff Wickes notes, Ephrem often read his rhetorical aims into Scripture—that is, he employed the terminology and narratives of scripture, but recast them into different contexts and reshaped them according to his needs, in order to forge the boundaries of his community against subordinationist Christology. In this way, Ephrem appears to co-opt the genre of “rewritten Bible” for use in his crafting of the Hymns on Faith. Yet Ephrem’s scriptural poetics are conveyed through three relatively simple factors: his emphasis on a single moment of time, lexical symmetry, and his thematic symmetry. 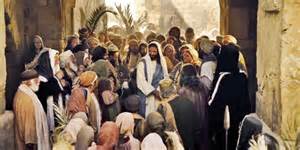 It is not uncommon for Ephrem to condense a multifaceted and lengthy Biblical narrative into a phrase or series of terms which invoke the account without displaying its verbosity. That is, Ephrem tends to employ short “moments” within his hymns as the means by which his audience may recall full Biblical stories. Not only do we see this in his mention of Zacchaeus[1], but this appears to be one of Ephrem’s primary manners of allusion throughout his hymns. In Hymn 24:4, we read “He mounted a despised foal”, a reference to the Triumphant Entry recorded in all four canonical gospels. Yet Ephrem only notes one instant in this narrative—the moment when Christ mounted the foal—leaving his audience to reflect upon how the rest of Christ’s entry into Jerusalem plays into the hymn, if indeed the rest of that narrative plays any part at all. Thus, Ephrem’s exegesis is relatively minimalistic in its use of scriptural materials, often using a single moment in time to connect his retelling with the (presumably) canonical accounts.

Another important factor in Ephrem’s exegesis and rewriting involves his use of lexical symmetry, this coming on at least two fronts. First, there is Ephrem’s concern for the proper Christological title for Jesus, namely his status as Son. This appears at multiple points in the Hymns on Faith, most clearly in retellings of Christ’s baptism.[2] The return to the proper and true name of the Son demonstrates that name’s place at the head of lexical terminology applied to Christ. Second, there is Ephrem’s engagement in “exegesis by concordance”, such as his connection of “foal,” “horse,” “ass,” and (by extension) “donkey” in Hymn 24. Thus we see the simplicity of Ephrem’s scriptural poetics through his use of lexical symmetry in both his emphasis on Christ’s true name (Son) and in his lexically defined composite re-readings of scripture.

Finally, we note the importance of thematic similarities in Ephrem’s recasting of scripture. Wickes summarizes this as follows: “Ephrem links diverse scriptural passages around his own rhetorical theme, but he chooses passages which already bear similarities to one another” (22). This connection serves as the linchpin holding minimalistic and lexical similarities together, allowing Ephrem to combine and recast the themes of scripture to suit his own rhetorical needs. Thematic connections are rendered through the lexical connection of dissimilar passages, as well as the similarities which arise as a result of Ephrem’s focus on one moment of Biblical narratives and his recasting of those narratives. Use of this kind of thematic connections thus gives scripture a highly flexible shape, allowing Ephrem’s scriptural poetics to fit his rhetorical needs even more precisely.

Before concluding this reflection, I want to briefly note the possible role of Tatian’s Diatessaron in the formation of Ephrem’s exegesis and rewriting. I was struck by the parallelism between the following sentence and common descriptions of the Diatessaron: “Ephrem [conversely, “Taitan”] brings together diverse and disjointed scenes from the Gospels to depict a unified and obviously divine Christ.”[3] One wonders if some of the “simplifications” of Ephrem, his creation of terse but unambiguous passages, derives in any way from Tatian’s unified account of the Four Gospels. This would seem to especially address difficulties like that noted in Hymn 63:5, where Matthean language appears, but is accompanied by a non-Matthean character—in this case, one centurion, reminiscent of Mark or Luke rather than the group of soldiers indicated in Matthew.