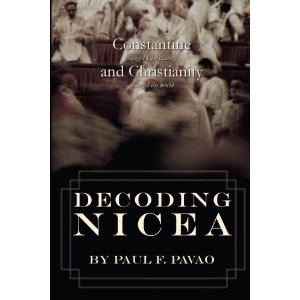 The history of Christianity can be a complex, confusing subject, full of competing claims and interpretations. Perhaps no single event in the life of the Church gathers as much contemplation and controversy as the Council of Nicea. Held in 325 CE outside of the newly established capital city of Constantinople (modern day Istanbul), this gathering of Christians from around the Roman Empire has been called everything from the paragon of authentic Christian orthodoxy to the great corrupting moment in the history of the Church. In recent decades, Nicea has taken on a new place of prominence in the mind of the average American Christian, as both popular culture (i.e., Dan Brown’s The Da Vinci Code) and historical scholarship (i.e., Gnostic gospels) have cast the council as an important redefining moment for the Christian Church. Addressing this vital historical event comes the latest edition of Paul F. Pavao’s Decoding Nicea: Constantine Changed Christianity and Christianity Changed the World (Selmer, TN: Greatest Stories Ever Told, 2014. viii+442 pgs.).

Decoding Nicea stands as a rather unique book, one which is geared toward a general historical overview of an important event, discussion of contemporary claims surrounding that event, and then a theological interpretation of said event. It’s an ambitious project and Pavao spends over four hundred pages undertaking his task. Decoding Nicea comes divided into five sections. Part I considers the story of the Council of Nicea, outlining its historical and theological background, the council itself, and then theological and historical aftermath of the council and its decrees. This first section also persuasively demonstrates that the Council neither fabricated Christian claims about the divinity of Jesus of Nazareth nor did it craft the official Christian canon of the New Testament. Part II examines some of the myths surrounding the Council, specifically its relation to Gnosticism, the Sabbath, and Constantine’s Christianity. Part III undertakes an in-depth examination of Christological thought and terminology prior to Nicea. Part IV looks at the organization and authority of the Church before the Council of Nicea and contains Pavao’s concluding theological insights for how contemporary Christianity should approach, understand, and incorporate Nicene theology. The final section contains a series of appendices, wherein there are a number of historical reference materials and translations of primary source material related to the Council.

Throughout Decoding Nicea, Pavao makes a number of claims—theological, historical, and otherwise. Three arguments stand at the heart of this book. First, that Nicea authentically represented the faith of earlier Christians, especially regarding who Jesus of Nazareth was. Pavao’s examination of ante-Nicene primary source materials and his historical narrative convincingly indicate that the Council’s decisions accorded with the Scriptures and teachings of the early Church (i.e., that Nicea was not a corruption of earlier Christianity). Pavao’s second argument suggests that contemporary Western Christians have neglected an accurate understanding the Council of Nicea, particularly its historical context, the importance of its decisions, and the kernel of its Christology. More broadly, this means that Christians need to study and understand their past more fully. It is not enough to have a basic idea of Nicea that is formed by popular culture and biased scholarship—Christians must return to the sources and contexts of this momentous event. Additionally, contemporary Christianity must come to terms with Nicene Christology and Trinitarian thought, either rejecting or accepting those teachings. The third argument of Decoding Nicea indicates that the Council of Nicea represents an important socio-political moment in the history of the Church, as Constantine’s calling of this council was the moment when Church and State effectively merged. While the Council certain remained orthodox and catholic in its promulgations, the events of the Council did represent a key moment of development for the Church. The legacy of Nicea would shape not only the next several decades of life in the Church and Roman Empire, but would also come to define the Western World for over a millennium.

One of Decoding Nicea’s many strong points involves Pavao’s superb job of using and incorporating primary source materials. Hardly a page goes by without a reference to scripture or the writings of the Church Fathers, and Pavao rightly pays particular attention to Eusebius of Caesarea, especially his Ecclesiastical History and Life of Constantine. However, there are some curious uses of primary source material. Notably missing at certain points are the Letters of Ignatius, the Cappadocian Fathers (Basil the Great, Gregory Nazianzen, and Gregory of Nyssa), and writings of Nicene-era orthodox Christians not named Athanasius or Eusebius. Several times—most notably the discussion of the Nicene aftermath and considerations of appropriate Nicene Christological formulations of the Trinity—Pavao missed opportunities to employ the works of someone like Ephrem the Syrian, who provides a perfect example of post-Nicene theology which rejects Arianism while also not inhabiting homoousian terminology. These curiosities aside, the inclusion of primary source materials (including those included in the appendices) commends this book to anyone wanting to understand the context of Nicea.

One of the weaker points of Decoding Nicea surrounds Pavao’s almost non-existent use of informed and recent scholarship on the early Church and Council of Nicea. Pavao attempts to explain this away in his brief second chapter (“How Do We Know Anything About Nicea?”), though his argument here more strongly suggests that historical knowledge should be founded upon available primary source materials, not that secondary literature is useless. In practice, also, Pavao occasionally relies on secondary scholarship, but it is almost always the perspective of the late-great church historian Philip Schaff. While this reviewer will be the first to affirm Schaff’s importance and insight, he remains a dated source who should be supplemented. Nowhere is this more evident than in the bibliography of Decoding Nicea: a four hundred page book on a historical subject should always have more than two pages of bibliographic information. This lack of scholarly sources contributes to some of Pavao’s interesting interpretations of early Church sources. This is especially true in his later sections and appendices, where he offers more of his own theological program. To note but two examples, the discussion of the rise of the Roman papacy and implications from Ignatius’s Letters for the monepiscopacy are rather tenuous. For a book which takes such a positive view of Christian tradition and is so engrossed with an oft debated historical topic which touches on so many areas of Christian history and theology, Decoding Nicea does a surprisingly poor job of employing even basic scholarly resources. Though many of the conclusions of this book to be historically sound, the type of research and scholarship that went into the book is troubling.

There is much else which could be written about Decoding Nicea. Perhaps the most apt and concise summary of this work is one which calls for its balanced reading in coordination with other sources and resources surrounding the Council of Nicea. Few readers of this book will come away entirely convinced of Pavao’s perspective, for he inhabits a nook of contemporary Christian faith which calls Protestants and post-Protestants to again take seriously the history of the Church. On this particular topic, Pavao’s attempt to recast the importance of doctrine and practice in the last chapter stands as an important reminder to all his readers. Insofar as readers of Decoding Nicea come away from their encounter with this book more aware of the history of the Church and the importance of thinking seriously about important issues, this work should be commended. The approach and insights of Decoding Nicea: Constantine Changed Christianity and Christianity Changed the World are well worthy of our consideration as we continue to examine and reflect upon one of the most important moments in the history of the Christian Church.

I received this book courtesy of The Greatest Story Ever Told publishers in exchange for my honest review. All opinions expressed are my own.