Skip to content
This post is part of an ongoing series examining Ephrem the Syrian and early Syrian Christianity. Given the length of Ephrem’s Hymns on Paradise and the number of reflection-worthy aspects of his thought demonstrated in these hymns, this essay offers several general reflections on Ephrem’s concepts of Paradise (historic and cosmic), the limiting of investigation, proper interpretation, and order. 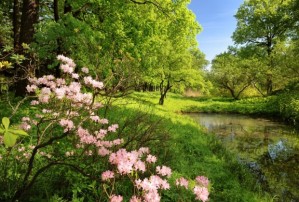 Ephrem’s Hymns on Paradise are a truly beautiful collection of the Syrian poet’s reflections upon the Genesis 2-3 narrative and reality of Paradise. More than any other collection of hymns we have considered to this point, the Hymns on Paradise develop Ephrem’s thought on a single (albeit lengthy) passage of Scripture, namely the account of Adam and Eve in Paradise. This is not to say that Ephrem does not incorporate other Scriptural passages and motifs, for he certainly does—the Parable of the Rich Man and Lazarus and story of King Uzziah being perhaps the most notable. Yet by-and-large these hymns focus on Genesis, and it will be interesting in the weeks to come to compare his poetic recasting of this narrative with his prosaic Commentary on Genesis.

It was especially interesting that while Ephrem bases his discussion of Paradise out of the Genesis narrative, he by no means feels the need to limit his reflections to only the historical/literal/narrative account of the pre-lapsarian Edanic Paradise, but also offers his perspective on—and indeed, journey to—the cosmic Paradise. At points he seems to shift effortlessly between his thinking about the “historic” and “cosmic” Paradises. It is not immediately clear whether he identifies one with other, but it seems that Eden prefigured Ephrem’s conception of the eternal Paradise of Heaven. Certainly there is significant typology and parallel between the two, enough for Ephrem to use his discussion of the lessons and images of Eden to explicate his theology of judgment, heaven, and the human soul (HdP 2, 8.1-2, 4, 9-11). 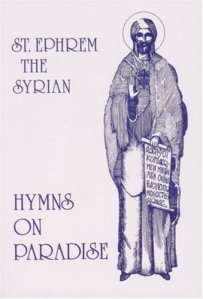 Ephrem notes the categories of hidden and revealed—“I revered what lay hidden / and meditated on what was revealed. / The aim of my search was to gain profit, / the aim of my silence was to find succor” (1.2)—calling his audience to think about Paradise in the proper way. In Hymn 15 Ephrem notes that Paradise is like the wind, both hidden and influential, and that any investigation of this historical and cosmic concept must necessarily be limited by human knowledge and the truth of the cosmos (HdP 15.1-2, 9). The importance that Ephrem places on the limits of proper investigation were somewhat surprising, not for the fact that Ephrem remains consistent between his Hymns on Faith[1] and Hymns on Paradise, but that he applies criterion of bounded knowledge to Paradise as well as investigation of the Son. This, I think, points to the authority Ephrem views as vested in nature and scripture as the necessary limits of human investigation (HdP 5.2), that the order of human understanding is in some ways more important than the topic of what is being investigation (HdP 1).

The principles of interpretation which Ephrem draws out through the Hymns on Paradise are also intriguing. In Hymn 1 he notes the importance of not pressing Scripture too quickly for a literal interpretation, but instead posits the importance of finding interpretation as figural and allegorical at times (HdP 1.3, 8-9). Ephrem emphasizes the human limitations of the description of Paradise in Hymn 11, where he argues that Paradise—even when revealed in Scripture—only comes to the mind through human language and metaphors, which are necessarily insufficient for describing the totality of Paradise in its beauty due to the limitations of human reason (HdP 11.4-7). Just as important is the fact that correct interpretation of the Scriptures can only come through the perspective of the orthodox theology of the Church (HdP 6.1-25). Finally, Ephrem’s principle of human freedom also comes across clearly in the Hymns on Paradise, as in Hymns 12-14 he admonishes his audience to overcome the deceptions of Satan and the misinterpretation of Scripture through the application of discernment and rejection of sinfulness (HdP 12.2-20, 13.4-9, 14.2). 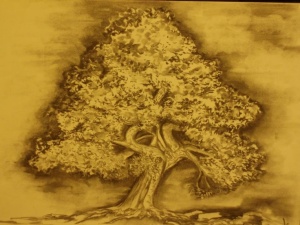 Order also remains an important theme for Ephrem in these hymns. In Hymn 2 we read that Eden was ordered into levels, just like Noah’s Ark, Mount Sinai, and Comic Paradise (HdP 2.9-13).[2] There is also significant typological order, as Ephrem describes the Tree of Knowledge as a veil in Paradise for the Tree of Life at the summit of the mountain an explicit parallel to the veils of the Israelite tabernacle and temple, separating the Holy Place from the Holy of Holies (HdP 3.5-17). In the same way that King Uzziah was punished for improperly crossing the temple boundary, so also was Adam excluded from Paradise through his disobedience concerning the Tree of Knowledge (HdP 4.1-11).

[1] More on these in coming posts.

[2] Does anyone know of anything written on the parallels with Dante on this topic?

One thought on “Ephrem’s “Hymns on Paradise””