“The greatest poet of the patristic age and, perhaps, the only theologian-poet to rank beside Dante.” — Robert Murray

Over the next several weeks, Pursuing Veritas will be running a series on reflections on the theology and hymns of St. Ephrem of Nisibis (often called Ephrem the Syrian). Before launching into these discussions of Ephrem’s theological mind and literary genius, however, I felt it prudent to offer a brief historical introduction to Ephrem. There are two primary reasons for this: first, because while some Christians may have heard Ephrem’s name associated with early Christianity before, few actually know much about the fourth century poet. And second, Ephrem’s context—ancient Syria—is somewhat different than the typical “Greco-Roman” culture that may be safely assumed for engaging most other early Christian writers.

Ephrem was born in or around the city of Nisbis (modern day Nusaybin, Turkey) in 306 CE. Although later hagiographic accounts suggest his father was a pagan, there is little in his hymns to suggest anything other than that Ephrem was born into a Christian household. Ephrem would have experienced the persecutions of Diocletian during his youth. After Constantine came to power, peace came to the Church in Nisibis, where Ephrem was appointed as a teacher and (eventually) deacon. An important archaeological link to Ephrem’s time in Nisibis is a surviving baptistery which bears an inscription suggesting its construction in 359 CE; thus, to this day we have access to a baptistery that Ephrem would have seen and possible assisted in using. During this time Ephrem seems to have begun composing hymns for his congregation (more on these below). 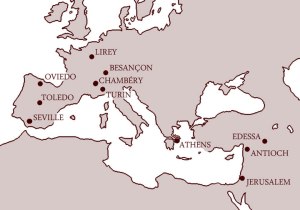 After Constantine’s death in 337 CE, Shapur II of Persia began a series of attacks on the Roman holding in Syria, laying siege to Nisibis in 338, 346, and 350 CE before finally capturing the city and exiling her inhabitants in 363 CE. Notably, during this battle Emperor Julian (the Apostate) was killed. Ephrem then moved to the city of Edessa, a major center of early Christianity. There he continued to compose hymns, including a number against various heretical groups such as the Arians, Gnostics, Marcionites, Manichees, and Bardaisanites. In both Nisibis and Edessa, Ephrem lived and worked in a context which was bilingual (Greek and Syriac) and religiously pluralistic. His desire for Orthodox Christianity to be victorious amid differing religions (especially Judaism), cults, and sects comes across quite clearly in a many of his hymns. After living and serving in Edessa for nearly ten years, Ephrem died in 373 CE.

Ephrem was an extremely skilled and proficient writer, with over four hundred of his works accessible today. Although Ephrem wrote in Syriac, copies of his works remain extant in Armenian, Coptic, Greek, Arabic, Slavonic, and Latin as well as Syriac. Additionally, several translations of his most important writings have been made into English, French, and German. Ephrem employed three basic genres for his writings: madrashe (lyric hymns), memre (homilies), and prose commentaries. His madrashe are the most numerous of his writings, having been gathered into “hymn cycles” on various themes and persons. These hymns may have originally been sung by all-female choirs (or primarily female choirs with a male leader) and were clearly an integral part of the worship in Ephrem’s community. Perhaps most interestingly, these hymns also functioned as potent sources for theological teaching and reflection on a variety of issues. Ephrem’s madrashe have now been used by Christian communities in and around Syria for nearly seventeen hundred years.

In addition to his hymns, Ephrem also wrote memre (homilies). These are less stylistically sophisticated and fewer in number than his hymns, but still contain a wealth of information concerning Ephrem’s faith and the contours of early Syrian Christianity. Finally, Ephrem composed prose commentaries, according to one early historian, writing a commentary on every book of the Bible. There are numerous commentaries attributed to Ephrem; however, only commentaries on Genesis and Exodus are universally attributed to the great Syrian. Also extant (but contested in their authorship) are commentaries on the Acts of the Apostles, Pauline Epistles (including 3 Corinthians), and the Diatessaron (a harmony of the four gospels composed by a second century Christian named Tatian).

The reflections to be offered here in the coming weeks will focus primarily upon Ephrem’s theological context and his hymns, although asides may be made for other topics and sources as well. I hope that this introduction offers some contextualization of the great poet and saint that will prove beneficial as my reflections move forward in the coming weeks (for more information, I have included a brief list of further reading below). In the spirit of Great Lent, let us now pray the Prayer of Saint Ephrem to conclude this introduction:

O Lord and Master of my life, give me not the spirit of sloth, meddling, lust for power and idle talk.

But grant unto me, Thy servant, a spirit of chastity (integrity), humility, patience and love.

Yea, O Lord and King, grant me to see mine own faults and not to judge my brother. For blessed art Thou unto the ages of ages. Amen.

One thought on “A Brief Introduction to Ephrem the Syrian”