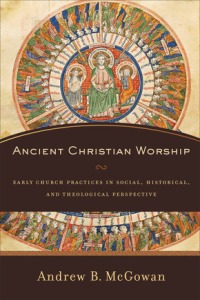 There are few times in history so important and yet so obscure as the years following the death and resurrection of Jesus of Nazareth, when the movement bearing his name transformed from a band of several dozen followers hiding in terror into an international community that would shape the subsequent history of the world. Despite the paucity of evidence from this period, historians and theologians alike continually return to the earliest years of the Jesus Movement, attempting to ascertain precisely who was doing what and how they were doing it. To help bring clarity to the all important aspect of Christian worship from this period comes Andrew B. McGowan’s masterful Ancient Christian Worship: Early Church Practices in Social, Historical, and Theological Perspective (Grand Rapids: Baker Academic, 2014).

In Ancient Christian Worship, McGowan takes a survey approach to the topic of Christian worship praxis and theology during the first four centuries of the Christian era. Taking a contextual approach, McGowan delves deeply into social, historical, and theological factors influencing the early Church. The special attention paid to the contexts of Second Temple Judaism, Greco-Roman culture, and “book practice” (including both reading and writing) of the period makes this work a treasure trove of insights into the worship of early Christians. Of course, from the start McGowan helpfully notes that what we (post)moderns call “worship” did not exactly exist during the first centuries of Christianity. He argues, rather, that distinctly Christian worship developed out of multiple contexts, impulses, traditions, and sources during this period, helping to create the tapestry of historical Christianity which influences contemporary expressions of Christian worship.

To show us the tapestry of ancient Christian worship, McGowan considers the formation and development of meal, word, music, initiation, prayer, and time. Considering each topic chronologically, McGowan constructively outlines the origins of various Christian practices and theological positions, correcting common presuppositions about the origins of certain practices and tracing their development through documentary and archaeological evidence. He takes a basically chronological approach to the presentation of this evidence, though he occasionally supplements this tact with periscopes into specific geographic locales, important early Christians, or formative theological debates. As helpful as McGowan’s interaction with secondary literature concerning early Christianity and worship practices might be, it pales in comparison to the usefulness of his engagement of primary source materials. Although his treatment of sources is far from exhausting (for how could it be?), he clearly highlights the most important sources and persons for each respective topic. His inclusion of sources from Syrian Christianity was especially welcome, especially his forays into the liturgical poetry of Ephrem the Syrian.

Though McGowan spends ample time on each subject he considers, the attention he gives to his Meal and Word sections designates them as particularly important for his engagement with early Christianity. Throughout his examination of the Eucharist, meal practice, the formation of the Christian scriptures, and Christian exegesis (in both sermons and commentaries), McGowan highlights the diversity of perspectives in the early faith and underlines the important ways in which even divergent views centered around central claims concerning the Risen Lord Jesus. For example, in the Meal chapter on the Eucharist, McGowan notes several different bases for Eucharistic theology, but also emphasizes aspects of real presence theology, ritual, and the message and meaning of Jesus that were present in all the forms of Christian Eucharistic practice. Accordingly, an important component of McGowan’s argument concerns the lived reality of Christian experience that was centered around the Eucharist and the Word (and initiated by baptism). This comes across even in the chapters on Music (Song and Dance), Initiation (Baptism, Anointing, and Foot Washing), Prayer (Hours, Ways, and Texts), and Time (Feasts and Fasts), where the centrality of Christ and the words of God enlivened and gave meaning to the development of these Christian practices.

Ancient Christian Worship is especially text focused—relying heavily upon the Christian New Testament, Jewish writings, Apostolic Fathers, Church orders, and other early Christian writings—thought not at the exclusion of other sources, for McGowan incorporates the insights of archaeology and general history into his presentation. This work finds an excellent balance between “what we want to find” and “what we actually know,” for McGowan is careful to not overstate or over interpret the evidence available to us. This makes Ancient Christian Worship an integral resource and introduction to Christianity during this period, for McGowan comes across as less interested in pushing a thesis (though, of course, he has one) than providing readers with an overview of the sources available and allowing others to craft their own theories of development. If there is any critique of this work, it would be McGowan’s unwillingness to take a position (any position0 on certain issues, though this is entirely problematic overall. Additionally vexing is McGowan’s occasional avoidance of Christocentric language, as if we cannot call early Christians those who gave total allegiance to Jesus as the Christ.

I received this book from Baker Academic Press in exchange for my honest review. All opinions expressed are my own.
Advertisement