In at least some contemporary circles, the topic of the afterlife and Hell are hot topics (pardon the pun). This is especially true within numerous Christian communities as they react to the perspectives of various pastors and scholars on hell and the state on non-Christians after death. It seems safe to say that most Americans know something about the concept of hell—that fiery place of torment that you go to if you’re not up to snuff with St. Peter (or something like that). And while numerous religious perspectives conceive of something similar to the Christian conception of hell (think of Hades for the ancient Greeks), what many people don’t realize is that the hell commonly conceived of by Americans isn’t really based on Biblical portrayals of someplace called hell. Indeed, much of what we think about hell and its prince, Satan, comes not from any scriptural text, but instead from the epic poetry of John Milton.[1] In this post, we will examine some of the Hell portrayed in Milton’s Paradise Lost.

In Paradise Lost Hell exists as the abode of those who were the cause of the fall of man—Satan and his demons. The whole of Paradise Lost includes such a vast number of allusions and references to other works—Classical, Biblical, Medieval, and otherwise—that there is simply not room here to discuss the variations and depth of insights used by Milton to describe Hell. What is clear from his description, however, is that Hell is a place of great discomfort for its inhabitants. A physical description of Hell begins when it is labeled a “bottomless perdition” (I, 47), with “no light, darkness visible” (I, 63), giving the idea of a darkness so thick that it almost takes on physicality that can be seen. Especially when contrasted with the “happy realms of light” that are the heavens (I, 85), Hell seems a dark and fiery gulf of misery (I, 90) that is both simultaneously dark and fiery. Milton describes the central feature of Hell as a large burning lake (I, 280) that is fed by four rivers: the Styx (not the rock band), the Acheron, the Cocytus, and the Phlegeton (II, 575-581). Here Milton pens a demonic parody of Eden, in which four rivers flow from a single source. In Hell, things are not as they should be, and four rivers each flow into a lake of burning fire. 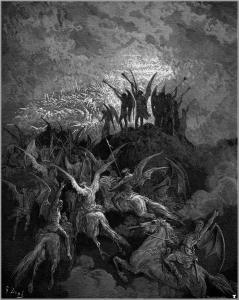 Beyond the lake of fire, Milton writes of a frozen continent beset with “perpetual storms” (II, 588) and covered with snow and ice –an impressive feature in a land of fire and burning lakes since the Cubs haven’t won the World Series in a while (II, 591). Milton’s picture in Paradise Lost would not be complete without considering the great city of Hell: Pandemonium. Built upon a hill that “Belched fire and rolling smoke” (I, 671), Satan and his demonic hoards mined the gold that was in Hell and built a city with neither rhyme nor reason, a city that incorporated the various styles of architecture all jumbled together (I, 686-751). One wonders at this point if Milton imagined the future ‘wonders’ of postmodern architecture. The name of the city itself, Pandemonium, literally means “all evil spirits”, an indication of what resides there, further adding to the sense of gloom and despair that envelopes all those that chaotic place. The inhabitants of Hell fit well into Milton’s description of the underworld. Even though they have been cast from heaven, Satan and his hoards are still ambitiously trying to defeat God. Their hatred for God is evident from their proposal of yet another open war with God (II, 43-105), making Hell a better realm than heaven (II, 229-283), and their ultimate course of action in attacking and corrupting the newly created earth and those who live there (II, 310-378).

In summing Milton’s image of Hell if Paradise Lost, we must note the theological and literary depth of his portrayal. His imagery and description of darkness and fire, burning geographical features, and the city of doom, chaos, and pandemonium: all of these rich images have drawn a terrifying and ghastly image of Hell. And it is worth noting at this point that the picture Milton has painted here appears remarkably similar to many people’s conceptions of hell as a physical location. What is perhaps most interesting about the general description to this point, however, is that almost nothing Milton has used to imagine Hell comes from a canonical source specifically describing Hell. The cultural consciousness of many American Christians concerning a description of Hell, in large part, comes to us through Milton’s writing in Paradise Lost. While few would be able to point to Milton as a source of their perception of Hell, his work has undoubtedly shaped American Christianities conception of Hades.

What remains unfortunate is that Milton’s concept of redemption found in Paradise Lost has rarely been transposed into conceptions of Hell. The physical descriptions of Hell seem to point towards a possible redemption of the depraved hellscape. The epic indicates that Hell contains burnt soil (I, 562), which is typically very fertile in nature and would make Hell ripe for cultivation. The reader sees a picture of a resource rich Hell (II, 270-271) which includes such precious metals as gold (I, 690) and evidently materials for erecting buildings as shown in the construction of Pandemonium. Even the presence of such physical attributes as rivers, lakes, streams, and hills may speak of a Hell that could be redeemed and turned into a habitable dwelling place. If it is possible for Milton to postulate a potentially redeemable geographical Hell, what then of its inhabitants? While Milton makes it clear that Satan himself will not be redeemed (though perhaps only because he will not come back to God, see IX, 464-475), Paradise Lost does seem to leave the door open for the eventual restoration and redemption of the inhabitants of Hell, however unlikely. To apply this to our own context does not necessarily mean that those who go to Hell will be given a second chance—I am advocating no dogmatic theological claims here, only speculative ones. What seems interesting is that American Christians so often conceive of Hell as a place where the unjust are justly damned. And there is certainly merit to such a conception of the enacted justice of a holy God. But Milton seems to allow for a gracious and forgiving side of God that has seen far less frequent representation in American Christian’s thinking about Hell.

As we continue to think about Hell, several things seem to be worthy of our consideration: First, we should attempt to be consistent in our theologizing. If you’re a Protestant who advocates sola scriptura, using Milton’s theology as a basis for your understanding of Hell seems a bit out of place. Second, while I in no way am advocating ridding the Christian tradition of the idea of a final judgment, heaven and hell, or consequences for sin, I do advocate a greater willingness to move past our singular conceptions of heaven, hell, and judgment in favor of perspectives involving the grace of God and (more) tentative claims to non-central theological concepts. And third, might I suggest that (as American Christians especially) we must be willing to engage the theological and literary insights of those great thinkers who have gone before us and to consider the present implications of their thinking and theologies.

[1] Please note that here I am not arguing against the Christian conception of Hell as a place of judgment or an eschatological destination—those topics are not the issues being discussed in this post.