This post is part of our ongoing series examining Early Christian Authority.

Some of the clearest indications that the early Church faced disagreements and divisions have been preserved in the writings on Gnostic Christian traditions and writings opposed to such movements. While various strands of Christian thought differed in their use and interpretation of extant Jewish and Christian writings, both orthodox and gnostic groups seem to have claimed for the scriptures as a form of authority. The diverse knowledge of and use of such writings demonstrates that each group sought to preserve the uniqueness of their movement by the utilization of extant texts and traditions. In today’s post, we examine four extant works of the Gnostic/anti-Gnostic genre of literature, including the Coptic Gospel of Thomas, Epistle of the Apostles, Third Letter to the Corinthians, and Ptolemy’s Letter to Flora.

The Coptic Gospel of Thomas was found among the writings of the Nag Hammadi Library, and constitutes a “sayings source” of 114 proverbs of Jesus. While this work was likely originally composed during the second or third centuries in Greek, it remains extant only in Coptic. The Epistle of the Apostles provides evidence on an anti-Gnostic ‘gospel’ narrative, in which the Risen Jesus conveys teachings to the Apostles, who in turn record such teachings for the community. This work was likely written in the second century to combat heretical groups deriving from the teachings of Cerinthus and Simon Magnus, and survives in Coptic and Ethiopic versions. The Third Letter to the Corinthians actually contains two short letters, one presuming to be from the Church at Corinth to Paul and the other his response to their letter. This letter also represents an anti-Gnostic position, combating the views of Simon Magnus and Cleobus. This letter appears to have had a fairly early date of composition as it was likely in circulation by the mid-second century. This letter also has the distinction of being historically accepted as canonical in certain churches, namely the Armenian Church. Ptolemy’s Letter to Flora remains one of the best sources for reconstructing the interpretive hermeneutic used by some of the Gnostic Christians, as the extant portions of this letter detail how to best understand the various portions of Jewish scripture. Ptolemy was a well-known second century Gnostic, and the portions of this writing that remain extant come from the anti-heretical writings of Epiphanius. 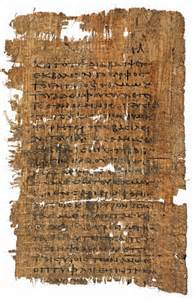 As would be expected of such a diverse group of perspectives and purposes, each of these writings uses written sources and traditions differently. The Coptic Gospel of Thomas remains unique in that it uses as “Jesus said” or “he said” introduction to the words of Jesus 112 times throughout the work (with an additional five places where the original document likely included a similar formula). While there are only two references to the Jewish prophets, there are at least twenty sayings of Jesus that are parallel to those words of Jesus found in the synoptic gospels. Of these there are quotations of material found in only Matthew, only Luke, in Q-material, and in all three synoptics. Notable concerns for this community referenced within the sayings of Jesus include concerns with apostolic authority, the Sabbath, circumcision, angels, the lending of money, and gender-influenced salvation concerns. Clearly for this community the words and teachings of Jesus, wherever they might be found, constituted their source of authority for a variety of concerns.

In the Epistle of the Apostles knowledge of a basic passion narrative constitutes the primary narrative knowledge, as the Risen Jesus recounts the events through the women and apostles. Notable in this work are the three quotations of Jesus’ words found not found in other written materials, with the exception of Jesus’ quotation of an unknown scripture which is also found in the Acts of John. Clearly evident in this writing are the concerns of the community that the Risen Jesus addresses, especially the authority assigned to the oral and written teachings of the Apostles, the condemnation of heretics, the role of angels, the Second Coming, authority of Jesus, and explanation of the coming resurrection of the dead. For this community, the words of the risen Jesus and the teachings of the apostles, especially those opposed to heresies, were seemingly held as authoritative. Similarly in the Third Letter to the Corinthians appeals to the words of Jesus and the teachings of the apostles are held as authoritative. This work’s pseudonymous nature demonstrates that authority given to the written teachings of the apostles, especially on such notable subjects as Christology, soteriology, and the resurrection.

Ptolemy’s Letter to Flora remains one of the clearest examples of Gnostic interpretative hermeneutics concerning written scriptures, as Ptolemy explains in detail the tri-part compositional nature of the Law of Moses. Employing a clear knowledge of the materials found in at least Leviticus and Exodus, Ptolemy uses the words of Jesus primarily found in Matthew to reconstruct the appropriate way for Christians to understand, interpret, and apply the various Jewish laws found in the Law of Moses, dividing them into laws that Jesus fulfilled, abolished, or symbolically transformed, the latter being those that Christians need proper knowledge to understand and then live out. Ptolemy uses a variety of sources, drawing primarily from materials found in the Gospel of Matthew. Additionally he cites material from the Gospel of John (calling the Fourth Evangelist “the apostle”), the books of Moses (Leviticus and Exodus), possibly Isaiah, and several writings of Paul (I Corinthians, Ephesians, and Romans), demonstrating knowledge of a wide variety of sources used in the early church. Ptolemy was of course primarily interested in proper interpretation, but also notes the importance of apostolic authority, including the Apostle Paul.

The wide variety of sources examined here prevents us from offering tentative conclusions in the all-compassing manner of previous textual studies. However, a word may be said about each of these writings. For the Coptic Gospel of Thomas, clearly the words of Jesus were held as authoritative, wherever they might have been found. The Epistle of the Apostles and Third Letter to the Corinthians demonstrate perspectives that rely heavily upon the teachings of Jesus and the authority of the teachings of the Apostles, especially those concerning beliefs believed to be under attack by heretical groups. Ptolemy’s Letter to Flora offers insights into Gnostic use and interpretation of Jewish and Christian scriptures, as well as offering a picture of the widespread use of Jewish and Christian writings by the mid-second century. As previously noted, clear for each of these writings is their use of written and traditional authority in an attempt to defend and preserve what they understood to be the uniqueness of their portion of the Jesus movement.