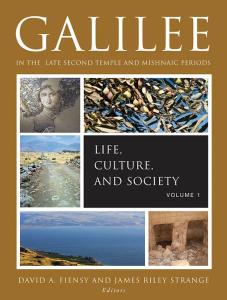 A longstanding problem for those attempting to study early Christianity involves the obscurity of the first centuries of the Common Era. Though nearly constantly reflected upon and studied since those years faded into the past, there remain numerous gaps in our understanding of the world and context of Jesus and his earliest followers. Unfortunately, this fact becomes especially noticeable when examining conceptions of how Second Temple Judaism and those living in Ancient Palestine impacted the subsequent shape of early Christianity and Rabbinic Judaism. To help address this gap and to introduce the recent textual and archaeological findings from this important period comes Galilee in the Late Second Temple and Mishnaic Periods: Life, Culture, and Society: Volume One (Minneapolis: Fortress Press, 2014), edited by David A. Fiensy and James Riley Strange.

From the start Fiensy and Strange presents this collection as a consolidation of the past thirty years of research, synthesizing numerous journal articles, field reports, essays, and lectures on the Hellenistic, Roman, and Judean influences on Galilee from approximately 100 BCE to 200 CE, intentionally seeking to make this “new” information accessible to readers. While the motivation for much previous study of Galilee stemmed from concerns with the “Historical Jesus”—deriving from Ernst Renan’s desire to understand how the Lord lived as a child in Galilee—Fiensy and Strange outline the need for a “sober appraisal of ancient Galilee” that is interdisciplinary in its methods and multifaceted in its findings. Editors and contributors alike do a fine job of connecting past scholarly emphases with contemporary perspectives and concerns; for instance, essays on Historical Jesus research are situated along with work on social movements and economics. The voices employed in Galilee are likewise multifaceted: historians, archaeologists, biblical scholars, and social scientists from a variety of backgrounds cultural settings, and religious affiliations all meaningfully contribute to this volume.

Galilee stands as the first volume in a two volume set on the Late Second Temple and Mishnaic Periods, offering an overview of the cultural world of Galilee that becomes archaeologically excavated in the second volume. Following the introductions and a recent overview of Galilean studies, the contents of Galilee are divided into three major categories: History, Village Life, and Economics. Consideration is given to Galilean politics, religious practices, social movements, and notable Galilean personalities (an important “Who’s Who” of non-Biblical, or at least peripherally Biblical, characters). Village life is also highlighted through essays on the Galilean village, household Judaism, period houses, education, healthcare, and disease. The economic systems of Late Second Temple Judaism are also investigated, encompassing chapters on Roman Roads, markets and trade, the urban-rural divide, ancient standards of living, and taxation. If there is anything missing from these essays, it might be the lack of explicit consideration of familial structures, honor and shame dynamics, and patron-client relationships, though each of these important realities are noted in the contents of the essays. However, overall the content and scope of these essays is well-rounded, clearly presented, and does an admirable job speaking to a broad audience with the appropriate finesse and nuance that recent scholarship requires.

In several places Fiensy and Strange note that the period under examination gave rise to Talmudic Judaism and Christianity. Yet lacking in this volume (and apparently the next, given the outline presented) is any explicit consideration of the “Parting of the Ways” between Christianity and Judaism. Thought briefly touched upon briefly in Roland Deines’s essay on “Religious Practices and Religious Movements in Galilee: 100 BCE-200 CE”, this important issue is effectively glossed over throughout the rest of the volume. The emphases of this project, especially archaeology and social-science, are not directly concerned with is often cast as a theological question, so the neglect of this topic is not entirely problematic. However, given the purpose of Galilee to examine the life, culture, and society of this period (to say nothing of recent developments concerning the “Parting of the Ways”), one might expect to find some archaeological and/or social-scientific insights into why these two great religious movements diverged so rapidly and seriously from one another given their common backgrounds and contexts.

Evident throughout each of the essays in Galilee is the emphasis on archaeological findings and material culture as lenses into the world of early Christianity and Rabbinic Judaism. The scholarship of the last thirty years has by-and-large sought to emphasize these contextual aspects of this period, and this volume does an outstanding job bringing these issues to the forefront, serving as an excellent reminder of the need for the consideration of a wide scope of available evidence in this period. Galilee offers a number of valuable resources and reference materials for readers of all types. Each chapter contains footnotes and bibliography, and while some of these are more extensive and impressive than others, all serve as useful tools for engaging more fully the contents and nuances of the essays included. The opening pages are full of timelines, maps, and images of Galilee, again emphasizing the historical, archaeological, and material aspects of studying this period. The final pages of this volume contain additional resources, most importantly a subject index of the ancient sources cited throughout. For reference purposes it may have been helpful to include an index of tables and images used throughout the papers, though this is a minor issue compared to the overall value of this work.

As a book designed for lay people, college students, seminarians, and interested scholars of other fields, this first volume of Galilee masterfully succeeds in its ambitions, especially for those working in the fields of New Testament and Ancient Judaism. For my own personal project, the study of early Christian origins, this volume of Galilee serves as an invaluable resource for understanding the context of Late Second Temple Judaism and its impact on the Jesus Movement. This volume would function well as a classroom reader in a course on Second Temple Judaism and contains numerous essays that would appropriately introduce the context of early Christianity and/or Rabbinic Judaism. Overall, Fiensey and Strange are to be commended for collecting an excellent resource and introduction to Galilee in the Late Second Temple and Mishnaic periods. Not surprisingly, then, Galilee in the Late Second Temple and Mishnaic Periods comes highly recommended for those interested in learning more about this context, location, and period.

I received this book from Fortress Press in exchange for my honest review. All opinions expressed are my own.