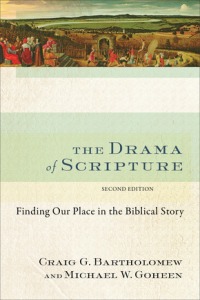 Very few books are must reads, especially for busy, sleep-deprived, tired-of-reading-books-for-class college students (or their even more taxed cousins, the grad student). Rarely does something come along that clearly and concisely explains complex issues with clarity and precision. Ten years ago, one such book came along: The Drama of Scripture, captivating readers and shedding much need lucidity on discerning the Biblical narrative. Now, ten years later, Craig G. Bartholomew and Michael W. Goheen have done it again, updating and revising the second edition of The Drama of Scripture: Finding Our Place in the Biblical Story (Baker Academic, 2014).

The major theme of The Drama of Scripture involves understanding the importance of context, specifically metanarrative context, in reading and interpreting the Biblical text. Human beings come to know each other and make meaning of life through stories—and Bible tells the story of God and His people. For Bartholomew and Goheen engaging God’s grand story not only helps us make sense of the Biblical text, but also shows us the way in which the world really works. Most critically, readers of the Bible are called to see that “God is acting in history for the salvation of the world” (22).

The Drama of Scripture outlines the Bible in six acts, or stages of the God’s story. These are Creation, Fall, Redemption Initiated, Redemption Accomplished, The Mission of the Church, and Redemption Completed. Those familiar with N. T. Wright’s metaphor of the Bible as a five-act play will note numerous similarities, explications, and explanations of that schema here.

In Act One, God establishes His kingdom, creating the world and all within it, including human beings. The most important part of creation encompasses humanity’s purpose: people were made for relationship. Bartholomew and Goheen helpfully demonstrate and illustrate that humans are made for relationship with God, their fellow humans, the world, and themselves. In Act Two, we see humanity rebel against God and His plan, the catastrophe of disobedience. God initiates redemption in Act Three by making a covenant with Noah, Abraham, and the People of Israel. This covenant sets in motion His plan for the salvation of all creation, the reversal of the Fall and restoration of Creation. Bartholomew and Goheen walk readers through the narrative of Israel, spending nearly seventy pages outlining the history of Israel as shown in the Jewish Scriptures.

After providing come context for the next act by examining the inter-testamental period and the origins of Second Temple Judaism, Act Four announces the coming of the Messiah, a Redeemer not only for Israel but for all people and all of Creation. In this act, we see how Jesus’ message of the Kingdom of God accords with the redemption promised to the people of Israel and how His message corrects those expectations in light of God’s desire to save the entire cosmos. Like the canonical Gospels, Bartholomew and Goheen trace the life and work of Jesus before culminating their story in His crucifixion, death, and resurrection.

Act Five outlines the mission and spread of the Christian Church into the entire world, primarily focusing upon the Acts of the Apostles and the Pauline Epistles. Finally, Act Six points to the future coming of the Kingdom of God to earth, the return of King Jesus and the redemptive completion of humanity and the world. In contrast to many of the contemporary reflections upon the “end of the world”, The Drama of Scripture posits a decidedly positive perspective, noting that God’s “cosmic restoration” of the universe means that cultural achievements of history will be purified and continue after God again comes to earth.

Readers of the first edition of The Drama of Scripture will notice plenty of differences between this edition and the last. While there have been several important insertions and deletions, the majority of the revisions made to this edition are organizational in nature, further clarifying Bartholomew and Goheen’s outline of the Biblical metanarrative. Perhaps most beneficial are the endnotes, providing explanation, clarification, and additional resources to readers without cluttering the pages of this volume. On a more subjective note, the cover to this edition is far more aesthetically pleasing than that of the first edition.

Recognizing that this book seeks to introduce students to the Biblical narrative, it would have been nice for some attention to have been given to the history of the Church in the midst of the “already and not yet” of the past 2,000 years. Of course, understanding the New Testament Church is of the utmost importance and applying our knowledge of God’s plan for creation in the contemporary world is vital for Bartholomew and Goheen’s purposes. Unfortunately, there isn’t much in-between, at least as presented here. At least acknowledging the pluriform ways in which the People of God have lived and worked through the centuries would have been a great segway into the history of Christianity. Additionally, the work and theology of the Apostle Paul remains emphasized even beyond the Apostle’s somewhat disproportionate influence within the canon. Obviously an introductory work cannot provide each apostle equal time, but a more balanced approach to the theology of the New Testament epistles would have made this presentation even better.

These relatively minor concerns aside, there remains much about The Drama of Scripture worthy of recommendation. This volume, which certainly bringing its theological presuppositions to its reading of scripture, nonetheless offers many valuable insights to readers of all Christian backgrounds and persuasions. Easy-to-read, Biblically accurate, historically engaged, and helpfully concise, The Drama of Scripture offers a superb introduction to the metanarrative of scripture, as well as a sound framework with which to offer Biblical interpretation and teaching in the contemporary context.

This work comes highly recommended for high school and college students looking to better understand their Bibles. The first edition of The Drama of Scripture has long been integrated into my “Introduction to the New Testament” syllabus, and this edition will take its place in short order. Non-students will also benefit from reading The Drama of Scripture, parents, pastors, theologians, and academics alike. This should be on everyone’s shelf and the metanarrative of scripture should be in everyone’s hearts.

I received this book from Baker Academic in exchange for my honest review. All opinions expressed are my own.

One thought on “Book Review: The Drama of Scripture, 2E (Bartholomew and Goheen)”