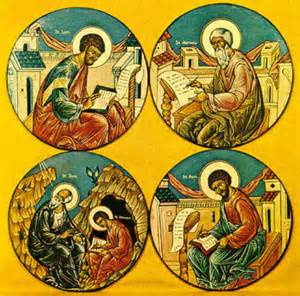 If you read the four canonical gospels (Matthew, Mark, Luke, and John) you’ll notice a few things. First, Matthew, Mark, and Luke contain a lot (a LOT) of the same (or at least similar) stories and parables. In fact, if you sat down and compared similar how similar the Synoptics are, you would find that approximately 76% of Mark is mirrored in 41% of Luke and 45% of Matthew. In other words, a significant part of Mark’s gospel materials (the stories, parables, sayings, narratives, etc) seems to have found it’s way into Luke and Matthew’s gospels. This material is called “Triple Tradition” (or sometimes Synoptic tradition– it’s found in all three synoptic gospels). Examples of Triple Tradition include Jesus’ Temptation in the Wilderness (Matthew 4:1-11; Mark 1:12-13; Luke 4:1-13), the Parable of the Sower (Mathew 13:1-9; Mark 4:1-9; Luke 8:4-8), and the Calming of the Storm (Matthew 8:23-27; Mark 4:35-41; Luke 8:22-25).

There are also portions of both Matthew and Luke that parallel Mark, but are not found in all three Synoptic Gospels (for example, the red and orange pieces of the pie below). Another thing you’ll notice when reading the Gospels is that there are significant portions of both Matthew and Luke that are found in none of the other Synoptics (the teal and green slices above). This includes stories like the Good Samaritan (Luke 10:25-37), the Parable of the Unforgiving Servant (Matthew 18:23-25), and the Healing of the Crippled Woman (Luke 13:10-17).

Finally, when reading the Gospels you’ll also notice a significant amount of material that Matthew and Luke share with each other that they don’t share with Mark (the blue slices). Passages considered this type of material includes the House Built Upon the Rock (Matthew 7:24-27; Luke 6:47-49), the Lord’s Prayer (Matthew 6:7-17; Luke 11:1-4), and Loving Your Enemies (Matthew 5:38-48; Luke 6:27-36). This material includes about 22% of Luke and 25% of Matthew, and is called either Double Tradition or “Q” material, “Q” representing a lost proto-gospel that Matthew and Luke both used but was subsequently lost.

For many NT scholars, this breakdown points toward something called the Two Source Hypothesis (better labeled the Four Source Hypothesis), where Matthew and Luke relied upon Mark’s Gospel and Q (as well as their own respective sources/memories) in the composition of their own gospels. Thus, “Q” (which, by the way, just stands for Quelle, the German word for “source”) is understood as a source of material about the life of Jesus (mostly sayings and short stories) that both Matthew and Luke drew upon when writing their gospels.

Or at least, that’s the theory. I say theory because, despite numerous books on Amazon that might be taken to suggest otherwise (see here, here, and here), no one has actually found Q. That is, scholars have found no manuscript that contains the sayings and stories of Jesus found in the Q material of Matthew and Luke (apart from manuscripts of Matthew and Luke, of course). The closest thing to Q which has been found is the Gospel of Thomas, which is a “sayings source” (like we would expect Q to be) that contains numerous sayings from Jesus and short stories about his life without any narrative setting.

Some of the common theories addressing the “Synoptic Problem”

Twenty (or so) years ago, many (if not most) NT scholars found “Q” to be a convincing theory, especially if you allowed Q to exist as a specific oral tradition. However several scholars, including Duke’s Mark Goodacre, have argued that Q no longer should be understood as a source for Matthew and Luke’s gospels (see Goodacre’s Questioning Q and The Case Against Q). And therein lies the topic of ongoing conversations about Q: how many people actually still buy into Q-theory? Personally, I’ve found Goodacre’s position to effectively problematize the Two (Four) Source Hypothesis and Q, though I’m not entirely convinced that other possible theories adequately account for the Gospels as we have them. What about you: are you (still) convinced by Q? Why or why not?

3 thoughts on “Thinking About “Q””