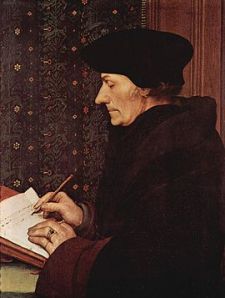 Erasmus of Rotterdam remains one of the most intriguing figures of late medieval Catholic Christianity with his Classical Humanist thought and New Testament scholarship, his bright wit and sharp tongue, and his lifelong devotion to the Catholic Church all painting the picture of a brilliant man who was pulled in different directions during the course of his life. Erasmus was a prolific writer and scholar, his Praise of Folly, Enchiridion, and Novum Instrumentum being among his longstanding and influential works. Indeed, his work with the Greek New Testament led many in even his own day to lay the blame for the Protestant division of the Western Church at his feet, saying about the Reformation that “Erasmus laid the egg, but Luther hatched it.” While Erasmus remained faithful to the Catholic Church throughout his life, he was not immune from scathing criticisms from his fellow Catholics regarding his works. While scholars have argued that throughout Europe scholars had begun asking critical questions of the Latin Vulgate and New Testament before the publication of his works, it was Erasmus’ perspective that often drew the most outspoken critiques (Margolin, 137 and Jenkins, 28). In attempting to understand Erasmus’ views on scripture, canon, and authority, scholars have long drawn upon three major sources: Erasmus’ Novum Intrumentum and the Paraclesis (introduction) to that work, his rejection of the Latin Vulgate in his textual scholarship, and his foundation of the philosophy of Christ found especially in the Enchiridion.

Erasmus’ Novum Instrumentum represented a major shift in the history of the Christian Church, as for the first time in nearly one thousand years the Western Church had access to a Greek edition of the New Testament. His publication of this work was not without its problems, for by nature of its very existence the Novum Instrumentum posed a significant threat to the longstanding authority of the Latin Vulgate for the theology and practice of the Catholic Church, a threat that was not taken lightly by the Catholic traditionalist (Jenkins, 27). As his Paraclesis makes clear, the publication of the Greek New Testament was intended by Erasmus to restore the biblical text to the heart of Christian life, to return medieval theology to its biblical roots, and to free scriptural interpretation from the grip of scholastic philosophy (Exhortation and Jenkins, 27). Such concerns make clear Erasmus’ convictions concerning the centrality of scripture for the Christian life and the need for all followers of Christ to study the Bible (Jenkins, 41). The practical impact of such conviction involved not only Erasmus’ publication of the Greek New Testament, which while useful for Greek reading scholars did not prove especially helpful for the general population, but also included his calls for widespread vernacular translation of the scriptures for all contexts (Jenkins, 42).

In the Paraclesis Erasmus argued that scripture enabled all Christians to grow to maturity, thereby assisting his goal that scripture and the faith of the faithful be freed from the grip of the scholastic theologians (Jenkins, 43). This argument against scholasticism and the call for everyone to read scripture was further strengthened by Erasmus’ claim that scripture properly interpreted in relation to its original language and context created a clear basis for Christian theology (Jenkins, 46). In considering Erasmus’ views on canon, it remains worth noting that he followed the typical Catholic canon in terms of content and order in his edition of the New Testament. Erasmus’ Novum Instrumentum was truly a seminal work in the history of the church, not only because of its widespread use and impact,[1] but also because of Erasmus’ views on scripture found within it, especially his calls to restore scripture to the heart of the lives of ordinary Christians.

Not unlike his publishing the Novum Instrumentum, Erasmus’ rejection of the Latin Vulgate as the source of Christian scriptural authority also had longstanding impact. The rejection of the Vulgate was not the position of Erasmus alone; indeed, humanist scholars such as Lorenzo Valla, Jacques Lefevre d’Etaples, and John Colet also found the Vulgate to have been something less than sacred scripture (Margolin, 160). Erasmus’ views on scriptures, and indeed his philosophy of Christ, were founded upon his commitment to ad fontes humanism and the need to read and interpret scripture in its original languages (Jenkins, 47). Erasmus’ heavy reliance on the Greek text stemmed from his conviction that the Greek manuscripts were closest in proximity to Christ and the Apostles and thus best conveyed the truth of their teachings (Margolin, 143 and Jenkins, 51-2). With such an understanding, Erasmus moved away from what had been a traditional claim to the authority of the Vulgate, namely that it has been sanctioned and used by several church councils in the West (Jenkins, 54). Arguing for a more philologically consistent and contextualized understanding of the texts of scripture in their original languages, Erasmus appealed to Jerome’s writings concerning the accuracy of Greek over Latin manuscripts (Margolin, 144-5 and Jenkins, 56-59).

For Erasmus then, the ultimate authority of scripture rested firmly upon the evidence of the Greek texts (Jenkins, 51). In matters of ambiguity or potential misunderstanding, he affirmed that the traditional reading of the church was to be preferred, though even here he drew a distinction between essential and optional church doctrines based on the scriptural texts, pointing out a number of places where the Greek form did not support the traditionally authoritative theological reading of the church such as the now well known translation of μέτανόεω as “do penance” (Jenkins, 51). It should be noted that at the declarations of the Council of Trent (1545-63 CE) included phraseology concerning the importance of original languages, clearly a reference to the works of Classical Humanism and Erasmus (Mullet, 39). This council also issued a formal decree concerning the sufficiency of scripture and tradition, not only further cementing the authority of scripture within the church, but also formally endowing the traditions of the church with the authority of the Holy Spirit (Mullet, 39-40). Additionally, Trent disagreed with Jerome’s and likely Erasmus’ position on the value of the Old Testament Apocrypha, including it in the Christian canon (Mullet, 40-1). Unfortunately, Erasmus had died before Trent in 1536, making his reaction to the council’s decrees on scripture, canon, and authority unknowable, this despite the influence of his position on the Vulgate during the council.

One thought on “Luther and Erasmus: Erasmus’s Background (P1)”