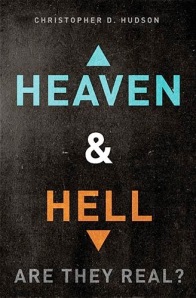 In Heaven and Hell: Are They For Real? Christopher D. Hudson seeks to provide answers to some of the most common questions regarding the afterlife. Books engaging heaven and hell have been fairly common since Rob Bell’s Love Wins, and Hudson offers another work from the broadly evangelical camp by drawing upon scripture, personal experience, and the perspectives of popular scholars.

Heaven and Hell is divided into (unsurprisingly) two major sections: the first addressing questions on heaven and the second concerning itself with hell. In the heaven section, questions are considered dealing with the moments after death, what life in heaven looks like, what heaven looks like, who is in heaven, and the like. The section on hell deals with questions such as how real hell is, if going to hell is a choice, what hell looks like, the final judgment, and contemporary challenges to the belief of hell.

Most unique and helpful about Heaven and Hell is the ‘catechetical’ outline, where a question is posed and then answers are offered, and then another question, and so on. Since many people are approaching these topics with many (often personal) questions, I found Hudson’s reliance on Q&A a useful tactic. There are around sixty questions, the answers to which each start with a Bible verse or two addressing the question which was posed, followed by varying lengths of commentary on the question, and ending with a “For Further Thought” reflection and question. A plethora of popular thinkers and writers from a broadly evangelical perspective are quoted throughout Heaven and Hell, including Randy Alcorn, Mark Buchanan, Tony Evans, Billy Graham, C. S. Lewis, John MacArthur, and Joni Erickson Tada.

Some responses to this book have criticized its lack of originality. However, I found the consistent appeals to scripture and the perspectives of others a wise and helpful solution. Personally, I know that I don’t have all the answers to questions about heaven and hell, and however smart Christopher Hudson may be, I doubt he has all the answers either. Reliance upon the wisdom of those who have gone before us (even if it is a relatively small sample size of evangelical thinkers) comes across as most faithful and appropriately honest for potentially flamboyant topic such as heaven and hell. On this front I would have liked a broader use of scholars and sources for thinking about Heaven and Hell, as references to academic scholars or perspectives earlier than the 20th century are few and far between.

Does this book answer the question about whether heaven and hell are real? Yes and No. If you are committed to the basic presuppositions and worldview of American evangelical Christianity, then the evidence and answers presented in this book support a certain view and interpretation of heaven and hell. However, if you are not committed to the basic perspective of this book, being either from a different Christian tradition or something distinct from Christianity, then this book is likely not going to convince you of much concerning heaven and hell. I do not mean this as a criticism, but rather as a caution. If this book was designed as an apologetic tool for convincing certain people about the realities of heaven and hell, then it does not accomplish its task. If however—and I believe this to be the case—the purpose of Heaven and Hell is to offer some clarity for a specific audience on a topic which has been getting a lot of recent attention, then Hudson should be commended for his work.

While I would personally suggest works such as C. S. Lewis’ The Great Divorce or Steve Gregg’s All You Want to Know About Hell: Three Christian Views as things to read before coming to Heaven and Hell: Are They For Real, this work has much to offer for those asking questions about Heaven and Hell. Heaven and Hell would likely work best in a Small Group or Topical Bible Study setting, especially with the Q&A format and “For Further Thought” section. Additionally, it could be a potentially useful reference for the evangelical reader/scholar interested in gleaning from the perspectives of popular thinkers, though it would of course be best to rely on first-hand sources for those perspectives. Overall, Heaven and Hell should be commended as a useful resource for thinking about heaven and hell.

I received this book from Thomas Nelson Publishers in exchange for my honest review. All opinions expressed are my own.