This post is part of our series on the Historical Luther. Today’s post examines the perspective of Heiko Oberman. 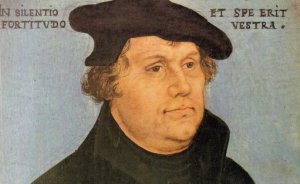 Heiko Oberman (d. 2001), in his book Luther: Man between God and the Devil, posits that “To understand Luther, we must read the history of his life from an unconventional perspective… in the light of eternity; not in the mild glow of constant progress toward Heaven, but in the shadow of the chaos of the Last Days and the imminence of eternity.”[1]  Oberman writes this biography of Luther with several key ideas in mind. First, he writes Luther on the assumption that “the Reformer can only be understood as a late medieval man for whom Satan is as real as God and mammon.”[2] Second, Oberman seeks to understand Luther in his contextual totality: “The crucial point is to grasp the man in his totality—with head and heart, in and out of tune with the temper of his time.”[3] An overview of Oberman’s work will demonstrate that he does indeed demonstrate the eternal direction of Luther’s life, his medieval political and religious context, and Luther’s’ belief in the reality of Satan.

Oberman first introduces his reader to the last days of Martin Luther, for him a fitting introduction to the eternal nature of Luther’s theological enterprise. Oberman then seeks to contextualize the reformation under Luther as both a highly political event of the Holy Roman Empire of the German Lands,[4] and as an unquestioningly medieval event, that is to say that his efforts cannot be viewed outside of the context of general calls of reform and restoration of the Church, [5] medieval eschatological predictions and understandings,[6] and the medieval understanding of the person and purpose of the antichrist.[7] These factors are critical for Oberman, as he understands Luther as a highly active apocalyptic figure, who pursued restoration and Christian life in the Last Days,[8] while eagerly awaiting the return of Christ.[9] Further, Oberman seeks to understand Luther via his elemental educational influences, a topic that we will consider below in conjunction with Hendrix and Kolb. For Oberman, there is no necessity to the Reformation under Luther, though the rise of the university, growing modern thought, and humanism,[10] combined with the political makeup of the Church, especially the highly oppressive influence of the monasteries,[11] realized a road ripening for reformation. In seeking to demonstrate a complete understanding of Luther, Oberman emphasizes his Heaven-oriented context, as well as the politically religious factors that, while not necessitating a reformation, certainly helped young Luther along in the development of his reformation thought.

Oberman’s presentation of Luther’s context stands apart as his best argument for his belief in the person and active role of the Devil in the life of the Reformer. The context of medieval belief in Satan, while for Oberman an important facet in understanding Luther, seems to hold a place of secondary importance in his conceptualization. Of primary important are the words of the Reformer himself.  Oberman writes that, “Luther places Satan’s attacks through temptation at the core of his explanation of the sixth petition of the Lord’s Prayer: ‘And lead up not into temptation.’ His elucidation revises the medieval notion that the Devil leads every man into temptation through his carnal instincts… No one can avoid temptations and enticements as long as we live in the flesh and have the devil around us; and this will not change…”[12] Oberman argues that Luther saw the Devil ‘s attacks as “directed at certainty of salvation,” a fear that plagued him throughout his life.[13] While these attacks against the faithful could not be stopped, Luther argued that the important factor in the Christian life was to resist the Devil and fight against his temptations. Without Christ, one cannot ultimately defeat Satan. Oberman sees this development, from resistance of the Devil to reliance on Christ in that resistance, as a key factor in not only Luther’s reformation breakthrough concerning Christ, but also as an indication of Luther’s understanding of the immanence of the Devil himself.[14] Ultimately, Oberman views Luther’s theological path one of focus, and that “following him means being initiated into a life between God and the Devil, the vital problem of his theology, where Scripture, grace, and faith—the three basic Reformation concepts—interpret and clarify one another.”[15] For Oberman then, Luther’s theology necessitated that he view the Devil as a very personal and real enemy of the Christian. He additionally argues that Luther held that not only the individual Christian, but the whole corporate Church was a battleground between God and the Devil.[16]  For Luther, the continued struggle against the Devil, in his understanding now with the continued assistance of Christ, ultimately led the Christian to live for eternity in Christ and for love of neighbor.

Does Oberman succeed in meeting the expectations of his assumptions and key ideas? While not receiving full treatment here, Oberman argues well from a contextual standpoint that Luther was indeed focused upon eternity and the proper ethical life for the Christian given his understanding of the immanence of eternity. His argument concerning the centrality of an active and personal understanding of Satan similarly argues well, as the personal nature of Luther’s theology and medieval context concerning the role of the Devil integrate well in Lutheran theology for Oberman’s position. From a historiographical perspective, Oberman highlights a critical area of study concerning Luther’s theology using the context of the Reformers beliefs and Luther’s own theological concepts, both the importance of the eternal and the person of Satan. His goal of understanding a complete contextual understanding of Luther remains a noble goal, and continues to be more fully realized in ongoing Luther studies.

[8] Ibid., 79-81; Oberman writes that “Luther horizontalized Christian ethics: he transferred its goal from Heaven to earth” (79), an indication not of his living simply for life on earth, but as an indication of the value that Luther placed upon true faith on earth in preparation for Heaven.

One thought on “Heiko Oberman on the Historical Luther”