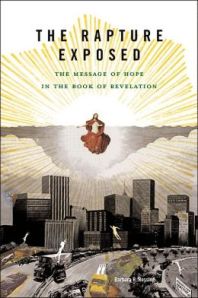 Rossing begins The Rapture Exposed with an introduction to the topic of the End Times (eschatology) within Christian theology. She critiques the Rapture perspective which suggests that the world cannot be saved and the lack of Christian ethics which are displayed as acceptable within the popular eschatological thriller series, Left Behind. While covering a broad variety of topics, Rossing may have introduced many readers to a plethora of perspectives and ideas that many popular readers may not be immediately familiar with. However, she makes her often wordy points well and gets her main thesis across: the book of Revelation is not an acceptable Biblical basis for rapture ideology. She then seeks to reargue the ‘traditional’ interpretation of Revelation: a message not of death and destruction but of resurrection and hope. Rossing introduces counters to rapture theology and the basic history of the belief in her second chapter, something which may have done better as the beginning of her book. Nevertheless, Rossing accurately sums up the important historical figures in the realm of dispensational theology, including John Nelson Darby, Cyrus Schofield, Moody Bible Institute, Dallas Theological Seminary, Charles Ryrie, and Hal Lindsey. Rossing then moves on the actual basis of dispensational theology—showing how the dispensationalist system finds its systematic roots in a maze of proof-texting, non-historical readings of scripture, and non-canonical interpretation, the result of which is the creation of a systematic theology divorced from its historical and contextual foundations. Focusing on the ‘rapture’ event, Rossing dissects various texts used by dispensational theologians, systematically arguing that such a use of common proof-texts is not at all Biblical, canonical, contextual, or (at times) even a truly legitimate interpretation and rendering of the passages in question.

One of the most fascinating issues surrounding the entirety of Dispensational Rapture theology is the perspective that it encourages concerning the current political context of the Middle East. Rossing goes into great detail discussing rapture theologian’s views on the Middle East and their interpretations of scripture and theology for how the current situations can and should turn out. Rossing is highly critical of dispensationalist’s such as Hal Lindsey, Tim LaHaye, and Dick Armey (Congressman, TX) and their view on violence and war within the Middle East. She suggests that we take the context of the Biblical message of peace to the world and apply it to the eschatological question. She does not suggest a peace at all costs mantra, but delivering a message of love and service in Christ, a message that many readers should find convincing in light of the Biblical metanarrative. Within her next section, Rossing explains the relationship between prophecy and apocalypse, specifically how Biblical prophecy and apocalypse were generally understood to be written for the immediate context or for the near future, not for people thousands of years away. It is within this section that Rossing begins to offer her counter opinion to the Dispensational Rapture, and it is here that I feel the book deserves it greatest critique.

A key component of Rossing’s goals in writing The Rapture Exposed was her goal of presenting in popular language an alternative interpretation of the book of Revelation in order to stand out against the widely held dispensational view of Rapture eschatology. Upon the completion of the book, one must conclude that Rossing has done an acceptable job at such a presentation. Her criticisms of dispensational theology are a potential rhetorical goldmine, not only in the public mind, but perhaps even for scholarship as well. Her critiques ask critical questions which rapture theologians must answer. Overall, The Rapture Exposed does an fine job exposing some of the darker concepts, assumptions, arguments, and areas of question within dispensational theology and demonstrates that there are indeed alternative interpretations of the book of Revelation, interpretations that are perhaps far more Biblically sound and true to historic Christianity.