This 144th Biblical Studies Carnival marks the twelve year anniversary of these events. I’m honored to be facilitating today’s overview of the very best that the Biblioblogging world has to offer.

Over the next several months, these fine people will be hosting the carnival:

If you’re interested in signing up to host a future Biblical Studies Carnival (or just want to have a conversation with a truly pleasant person), contact Phil Long (email, @plong42). Hosts are needed for June, July, August, October, November, and December. Speaking of Phil, I want to thank him for continuing to coordinate these carnivals, and for allowing younger scholars such as myself the opportunity to host.

In lieu of categorizing this month’s posts into 12 categories and having 12 representative articles for each, I’ve organized them into Hebrew Bible/Old Testament, New Testament, Early Christianity, Reading Phil Long (an homage to our Godfather of Biblical Studies Carnivals), Theology and Hermeneutics, Book Reviews, and News. Happy reading!

Bob McDonald continues his amazing project with a bevy of posts this month. Two of my favorites were on Psalm 22 and Ezekiel 37.

Over at BAR, Eliat Mazar reports on the possible discovery of the prophet Isaiah’s signature. Which elicited responses from Christopher Rollston (Part I, Part II, Part III) and Deane Galbraith (among others).

Tim Bulkeley offers a two part series on the Judgmental Old Testament God (and the perspicuity of scripture).

Bruce Bower comments on scholars’ propensity to label ancient toys as religious artefacts–and notes some recent corrections to that tendency.

Jonathan Orr-Stav asked all sorts of questions this month, including when did the term “Jews” (rather than “Israelites” or “Hebrews”) come into use?

Abram K-J questions if his namesake lied (again) when he said that Sarah was his half-sister.

Scot McKnight talks about unveiling Paul’s women… And Peter Gurry offers some further reflections on the suppression of Junia.

J.K. Gayle reflects on de-privileging in Matthew 15:21-29–and offers some fascinating analysis of the translation of Matthew 18:2 (spoiler alert: it’s a girl).

Joan Taylor asks what Jesus looked like (as a Jew in the first century).

Michael Kruger offers some reflections on the gospel genre and why it matters.

When it comes to the quest for the historical Paul, James Tabor reminds us that sources, presuppositions, and method are everything.

Jim Gordon reflects on when the light is incomprehensible to the darkness (and John 1).

Ben Witherington III has been running a series on the contents of the Museum of the Bible.

The Center for the Study of Christian Origins recorded Helen Bond’s talk on the quest for the historical Jesus and conversed with Larry Hurtado about methodologies for New Testament Studies.

Charles Hedrick wonders if the name of Jesus is “magic” or if the Bible has mislead us.

Reading Acts continues to be one of the most active Biblioblogs, posting nearly every day on all manner of biblically-related topics. Phil has run series on Hebrews, James, and 1 Peter this month. I must admit that I’m impressed by (and perhaps a little envious) of his output.

The Christ, the Unblemished Sacrifice

We Are Not Those Who Shrink Back

Is the Letter of James Pseudonymous?

The Authorship of the Letter of James

James and the Diaspora

The Significance of James

Was James an Unbeliever Before the Resurrection?

James and the Wisdom of Sirach

The Rich and the Poor in James

A Warning for Teachers

Planning for the Future

The Rich Have Fattened Themselves

Praying for the Sick

What To Do With One Who Wanders

Is 1 Peter Addressed to Jewish or Gentile Christians?

Elect Exiles of the Dispersion

John Meade examines how some scholars (primarily McDonald and Kruger) look at the relationship between inspiration and canon in the early church.

Ian Mills shows off his skills in reading palimpsests (in Syriac!) from the Sinai Palimpsest Project.

Aphrodite Kishi welcomes Lent with the Fast Before the Feast.

Michael Bird begins a conversation about the necessity of tradition for theological interpretation.

Nijay Gupta instructs us on what a seminary professor does.

Mary Wellesley shares about the origins of Valentine’s Day at the Medieval Manuscripts Blog.

Ruben de Rus walks us through the Spurgeon Study Bible.

Nijay Gupta reviews a collection of essays on Paul as Pastor.

Abram K-J reviews the six-volume ESV Reader’s Bible (and I get jealous). 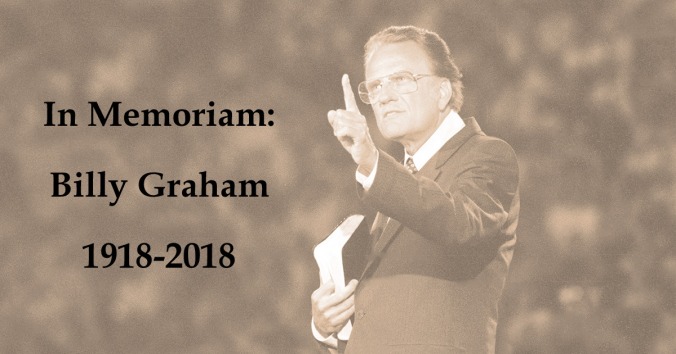 “Someday you will read or hear that Billy Graham is dead – don’t you believe a word of it. I shall be more alive than I am now. I will just have changed my address. I will have gone into the presence of God.” ~ Billy Graham

Billy Graham was undoubtedly one of the most influential religious leaders of the 20th century, and there has been significant reflection on his influence and legacy since his death. Christianity Today has an impressive outlay, which articles from such figures as Richard John Neuhaus, Chuck Coulson, and John R.W. Stott. Over at First Things, Grant Wacker also has a piece on Graham’s legacy. Countless others have written about Graham’s impact–on their lives, faith, and our society as a whole. He will be miss on earth, but celebrated in heaven.

Thanks for reading along–and for contributing to–the February 2018 Biblical Studies Carnival! I hope you enjoyed this month’s selections.