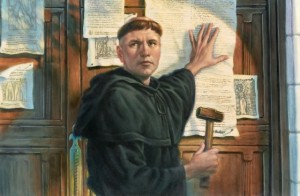 Scholars have long debated over Luther’s critical and radical breakthrough that led to the reform movement in Wittenberg (and indeed across Europe during the Age of Theological Reform); whether this understanding was a single idea or multiple ideas, where such an idea came from, whether the development of the idea was sudden or gradual, and so on. Oberman, Hendrix, and Kolb each offer differing perspectives concerning Luther’s reforming principle that challenged and changed the Western Church.[1] Oberman argues that the road to the “reformation breakthrough” began in earnest with Luther’s development of the principle that, “careful heed to the scriptures was the only scholarly basis for theology and thus the reliable standard of truth.”[2] In terms of chronological development of ideas, much of Luther’s early processing appears to be lost to historical research. Despite the lack of much clear evidence concerning the breakthrough aside from Luther’s own autobiographical account of the incident, Oberman argues that between 1518 and 1519 Luther came to an understanding of ‘justification by faith,’ and began “teaching the righteousness of God as that righteousness through which we are made righteous.”[3] This landmark interpretation of St. Paul in Romans “rent the very fabric of Christian ethics” and caused a great deal of turmoil within the Church.[4] Though in Oberman’s interpretation this understanding for Luther was opposed at every turn by the Devil, this fundamental shift in the understanding of justification formed the basis for Luther’s subsequent theological development, as well as the theological development of many other reformers and Protestants. END_OF_DOCUMENT_TOKEN_TO_BE_REPLACED