This is part of our ongoing series comparing the perspectives of J. D. Crossan and N. T. Wright on the Historical Jesus.

Crossan understands the canonical birth narratives to be theological fictions, as Mark, Q, and the Gospel of Thomas, which he views as the earliest historical sources, do not contain any form of birth narrative. Drawing Jesus into parallel with Caesar Augustus, Crossan writes concerning the miraculous birth narratives that, “greatness later on, when everybody was paying attention, is retrojected onto earlier origins, when nobody was interested. A marvelous life and death demands and gets, in retrospect, a marvelous conception and birth.”[1] Crossan understands the birth narrative of the Lucan account as comparing the birth of Jesus to that of John, who Crossan argues to be more historically prominent.[2] Similarly, the Matthean birth and flight narrative seeks to portray Jesus in light of the life and exodus of Moses, reflecting a theological rather than historical origin.[3] Crossan argues that certain canonical gospel narratives, including the birth narrative, are not historically accurate but rather are theological narrative based upon a reading of Old Testament prophecies and events into the life and times of Jesus. Accounts of the virgin birth, the Davidic line, the magi, shepherds, angels, role of King Herod, and flight to Egypt are all derived not from historical events, but instead a specific reading of Old Testament texts[4] and general chronological data about the life of Jesus that would have been known by his earliest disciples.[5] Thus, Crossan places little historical importance on the birth narratives of Jesus, arguing that in all likelihood he was born and raised like every other Galilean Jewish peasant in the first century. END_OF_DOCUMENT_TOKEN_TO_BE_REPLACED 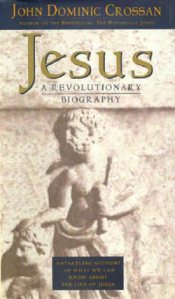 In Jesus: A Revolutionary Biography, John Dominic Crossan writes what he calls a “startling account of what we can know about the life of Jesus.” [1] Crossan, who currently holds a Professor Emeritus of Religious Studies position at DePaul University in Chicago, was co-chair of the Jesus Seminar from 1985 until 1996, and has written over twenty-five books on the historical Jesus and early Christianity. [2] Written for a popular audience, Jesus portrays Crossan’s personal “reconstruction of the historical Jesus derived from twenty-five years of scholarly research.” [3] In this work Crossan seeks to outline the life of the historical Jesus that he believes lay beneath the canonical Gospel accounts in a manner as accurate and intellectually honest as possible. [4] Upon reading this book, the reader will see that Crossan has assembled a variety of interpretations that, when combined with his theological and philosophical presuppositions and understanding of the canonical Gospel narratives, makes for a potentially persuasive and fairly historical narrative of the life of the historical Jesus.

As a part of the Jesus Seminar, Crossan’s name understandably carries with it a certain stigma in certain circles of theology and education. It must be noted that this review attempts to digest and comment upon this particular work from an academic and literary perspective. This review will not provide exegesis of Crossan’s theological or philosophical assumptions and considerations, but will only comment upon the coherency of his arguments as presented in a book intended for popular consumption.[5] Of primary concern for this review will be considering its purposefulness and adherence to such general guidelines of any introductory study of the Gospels, such as those presented by Mark Allan Powell in his work, The Fortress Introduction to the Gospels.[6] END_OF_DOCUMENT_TOKEN_TO_BE_REPLACED