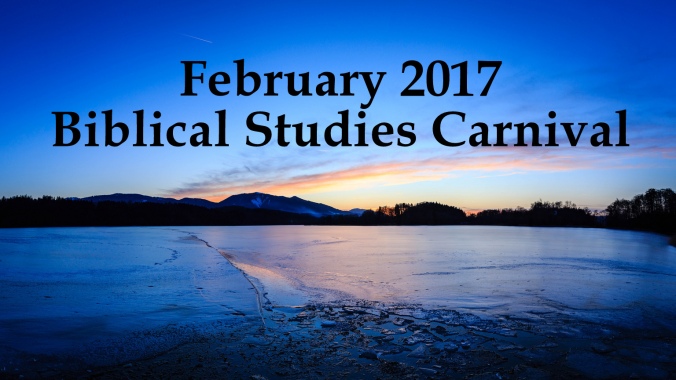 Assembled below are the very best articles written this past month from around the Biblioblogging world.  I know this firsthand because I have spent all month sifting through as many blogs as possible to find the finest that scholars and students have to offer. This month’s carnival includes submissions from the categories of Hebrew Bible/Old Testament, New Testament, Early Christianity, Reading Phil Long (an homage to the Godfather of Biblical Studies Carnivals), Theology and Hermeneutics, Book Reviews, Tools and Resources, and News.

Looking forward to future Carnivals, March will be hosted by Jonathan Robinson and April by Joshua Gillies of Theologians, Inc. (@Whitefrozen). Cassandra Farrin (email) of Ethics and Early Christianity hosts in June, Reuben Rus of Ayuda Ministerial/ Resources for Ministry hosts in July, and Jason Gardner of eis doxan hosts in August.

You’ll note that this schedule lacks a host for May. If you’re interested in signing up to host in May (or any other future carnival), contact Phil Long (email, @plong42). Speaking of Phil, I want to thank him for his continued coordination of these carnivals, and for allowing younger scholars such as myself the opportunity to host. Happy reading!

William Hart Brown mused on the emergence of ancient Israel.

Phillip Stern walked us through the lessons of the Song of Songs.

Bob McDonald reflected on the lexical complexity of אישׁ and אנושׁ (and continues to do fascinating work with metering Hebrew Bible chapters, as here with Genesis 12).

In a beautiful combination of Old Testament narrative and New Testament theology, Matt Emerson wrote on Saul and the Restoration of Israel.

Marg Mowczko questioned if gender roles are rooted in creation.

Matt Lynch pushed back on the idea that the curse of Genesis introduced all forms of discomfort or pain to our world.

Julia Lindenlaub asked, What is Gospel Textualization? and outlined a program for its implementation.

After reading Mark 14, Charles Erlandson found himself in the place of the naked young man.

In conversation with Walt Whitman, Cassandra Farrin reflected on the Lilies of Matthew 6.

Nijay Gupta summarized some recent works on the Fourth Gospel.

Marg Mowczko introduced the video series “Should Women Teach in Church?”, which walks through some of the critical Pauline passages on this question.

Michael Kruger examined 2 Corinthians 3 with an eye toward discerning the origins of the New Testament canon.

Ben Witherington III continued his voluminous series on responding to and commenting on E.P. Sanders’s Paul: The Apostle’s Life, Letters, and Thought throughout the month of February, from Part Five (Feb. 1) to Part Thirty-One (Feb. 27).

Brandon D. Smith talked about when Revelation took a swing at the Roman Emperor.

In a nice primer post, Ken Schenck outlined the riddles of Hebrews.

As part of an ongoing series on the Christology of Revelation, Jacob Prahlow examined Jesus Devotion in Revelation and the elements of Hymnic Devotion present in the Apocalypse.

Reading Acts remains one of the most active Biblioblogs, posting nearly every day on all manner of biblically-related topics. Below are some of the best posts from this month, thought these selections by no means exhaust the wealth of knowledge that Phil Long provides for us.

Hellenization and the Jewish Diaspora

Antiochus IV Epiphanes and the Beginning of the Rebellion

God as Judge in Apocalyptic Literature

Michael Kruger queried how early Christian expectations of the Second Coming might have impacted the formation of the New Testament.

Continuing an extensive conversation, Larry Hurtado outlined some of the key characteristics of early Christian manuscripts.

Ben Blackwell took a two-part look at the Christology of Justin Martyr.

Wayne Coppins offered an English/German version of Michael Wolter’s appeals to Theodotion on Daniel 2 and its implications for Luke 22.

Charles Hedrick pondered the origins of the Church.

John Mark Reynolds offered Jesus some education “advice” based on an administrative reading of the Gospels.

In honor of the Reformation’s 500-year anniversary, you should check out Carl Trueman’s Reformation Bibliography.

After reviewing some of the biblical evidence, Brandon Smith asked “How Often Should We Take the Lord’s Supper?”

John Ehrett appealed to Protestants about the importance of the Church’s Historical Tradition.

Michael Bird wrote on how justification by faith can serve as a resource for fighting racism.

On the last day of January, Jeffrey Stackert defended the liberal study of religion.

Christoph Heilig offered some musings from a couple of workshops on Ancient Languages.

Conciliar Post hosted a round table discussion on the purpose of the local church.

Judaism and Rome: Rethinking Judaism’s Encounter with the Roman Empire

How the Bible Came into Being HBU Conference

I hope you have as much fun reading this posts as I did. Thanks for reading along! For links to previous carnivals, click here.