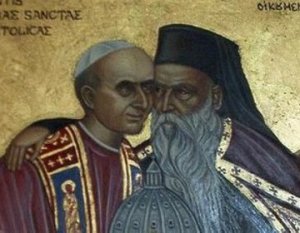 This past Saturday, I attended a conference titled “That They May Be One: The Past, Present, and Future of Orthodox-Catholic Dialogue” hosted by Saint Louis University and the St. Irenaeus Orthodox Theological Institute. In addition to hearing some excellent papers and meeting some quality people, I also had the opportunity to deliver a paper of my own, titled “Blogging Ecumenically: The Present and Future of Online Orthodox-Catholic Dialogue”, derived by my experiences as Managing Editor at Conciliar Post. Over the next week and a half, I’ll be sharing portions of this paper here. Although written about Orthodox-Catholic dialogue, I believe the general principles of this paper are applicable to Protestants as well. Below is the introduction to my paper:

As this very conference commemorates, in 1965 Pope Paul VI and Patriarch Athenagoras I mutually lifted their churches’ excommunications, inviting Catholics and Orthodox alike to mutual dialogue for the purpose of ecclesiastical unity.[1] In response, a number of Orthodox-Catholic partnerships have arisen, most notably the “Joint International Commission for Theological Dialogue between the Catholic Church and the Orthodox Church”[2] and the North American Orthodox-Catholic Theological Consultation.[3] Yet the world has changed in the past fifty years, and Orthodox-Catholic dialogue has changed with it. Perhaps the greatest shift involves the rise and propagation of information technology, which now allows quicker and easier interpersonal communication than ever before. 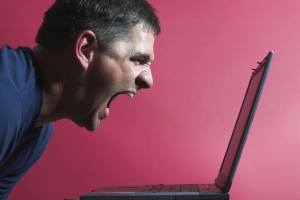 Of course, the wonders of technology are not without their own sets of problems, some of which influence Orthodox-Catholic dialogue. One such concern involves the over proliferation of information, the net result of anyone being able to selectively read online, forward an email, edit Wikipedia, or host a blog. If there is an idea out there, you can find it on the internet, making it increasingly difficult to ascertain the validity of information and accurately understanding what other worldviews actually believe. Another issue surrounds the exchange of ideas in an online format, where anonymity and technological indifference have enabled communication to become increasingly rhetoricized and vitriolic.[4] As a result of these challenges, online interaction often takes the form of shouting matches rather than serious dialogue.[5]

Unfortunately, there are precious few online forums committed to informed and faithful Orthodox-Catholic dialogue of the sort that does not often devolve into rhetoric-spewing incivility and theological bickering. [6] Even rarer are websites which seek to further broad inter-Christian understanding and foster a sense of ecumenical Christian faith among participants. This afternoon, I want to share several insights on Orthodox-Catholic relations from one website that does promote meaningful and civil dialogue, Conciliar Post, where I serve as Managing Editor. In what follows, I will briefly share the vision and background of Conciliar Post and then outline the three basic ways in which Orthodox and Catholic writers interact with one another on this site. In the end, I will argue that one of these approaches—which I have termed “coordination”—serves as the most fruitful option for online Orthodox-Catholic dialogue moving forward.

[5] Shouting matches that would almost certainly not occur (or, at least occur very differently) were participants speaking face to face.

[6] Such as The Institute of Religion and Public Life and its flagship journal, First Things.